The legends of the Light Horse were formulated by the deeds of the various Mounted Infantry units in the Boer War and, in particular, those in World War One. The Standards of comradeship, bravery and military professionalism displayed in both mounted and dismounted action during the campaigns in Sinai and Palestine are the enduring basis for all the qualities that the Historical Troops seek to preserve. So who were these men who made legends?
For many people, the pictures engendered by films such as “40,000 Horsemen” featuring a laconic bushman played by Chips Rafferty, remains the enduring image. It is, in fact, generally accepted by most that those original units were almost exclusively composed of men who were either stockmen, drovers, farmers, graziers, or station hands. No such illusions are held regarding the units of the 30s which, by then, had become very fashionable and as confided by Sir Sydney Williams, some troops often consisted largely of solicitors, doctors and other professional men. But back to the units of 1914-18 and the stuff of legends – were they all fabled bush horsemen? 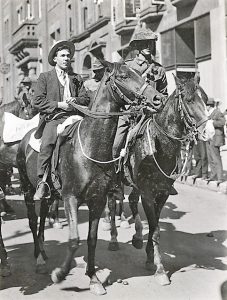 To answer accurately, it would be necessary to examine the enlistment documents of the day and this is no longer practical. It is also fair to say that the events that were to evolve into the legends were undertaken more often than not by those who were wounded, died, decorated or officially mentioned in action. Information on such men is found in footnotes to the chapters in Volume VII of the Official History of the War of 1914-1918: “The AIF in Sinai and Palestine” by H.S. Gullett. Listed below are some examples:

As can be seen, Gullett gives us the occupations of the men noted and it is, therefore, possible to extrapolate the makeup of the men in these units.
I examined all footnotes, and, as I was interested in the Light Horse only, I excluded all New Zealanders and British Army. I included Australians serving in the British Army who were posted to Mounted units or HQ’s. If Gullett did not mention an occupation, then I assumed that they fitted into the bushman role and counted them as a drover, farmer or such. Only those whose occupation was clearly noted in this category i.e. clerk, accountant, merchant, solicitor, etc. were counted as townsmen.
The information extracted shows that for OR’s the split was exactly 50/50. That is, of those mentioned in the footnotes, 50% were listed as having an occupation that was undeniably of an urban nature and 50% were bushmen or rural. In the case of Officers (a much larger sample), 8% were in the Permanent Forces, 44% were town or city and 48% were bush or not specified. So, of all the men officially mentioned, they were split approximately 50/50 between town and bush. Of course, it must be remembered that almost all men of 1914 rode whether they were Town or Country, but it is clear that the Light Horse of the 1914-18 period was an even mixture of townsmen and bushmen.
Some may rail against these facts because they feel a pleasant myth that they have held dear is no longer valid, but I prefer to find comfort in the fact that the deeds and legends were performed by and belong to ALL Australians – not just one segment of the population.

The qualities of the Light Horse should be preserved by all sections of the current community because they were established by a cross section of the population and belong, therefore, to all.
Maj Rob Freebairn (RL)