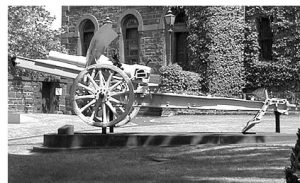 The picture at right shows a Turkish 5.9 inch Howitzer on display in front of Victoria Barracks on St Kilda Road in Melbourne. The plaque in front of the gun states that it was captured on the 8th of November 1917 by the Australian Mounted Division near Huj, during the offensive against the Gaza-Beersheeba line which culminated in the occupation of Jerusalem.

An extract from Major T.H. Darley’s book “With the Ninth Light Horse in the Great War,” follows:

The Turks had taken up a very strong position, supported by many guns, and the Yeomanry Brigade were seen to form a line, and with drawn swords, make a most gallant charge over the broken ground, in the face of heavy rifle and shell fire.

“A” and “B” Squadrons (9th LH) continued to push on, and the right flank patrol, under L.-Cpl. Bennett, gained Nebi Huj where, after shooting down the escort, they captured two 5.9 howitzers(pp103).

One of these two guns may well be the one shown in the photo. However it is not possible to be certain as there were a number of other guns captured on the day by other units. The Yeomanry charge referred to by Major Darley is detailed in Gullett’s official history. According to Gullett’s account General Shea whose 60th Division was held up by the Turkish artillery and troops opposing him, asked Lt. Colonel Gray-Cheape (who commanded the Warwicks) for his assistance. The Warwicks were from the 5th Yeomanry Brigade which together with the 3rd and 4th Australian Light Horse Brigades formed the Australian Mounted Division. Gullett’s account of the yeomanry’s charge follows:

Cheape had only ten troops of the Warwicks and Worcesters – about 200 men – but he decided to charge. Rapidly forming his men, he led them at the gallop upon the Turks, riding direct for the guns. The yeomanry had about a mile and a half to go, first down a slope in full view of the gunners, and then across the an exposed valley. As the British spurred down the slope, the Turkish guns lifted their fire from the British infantry, and concentrated on the approaching horsemen. Serving their guns rapidly, the artillerymen constantly shortened the range, until, as the shouting yeomanry dashed sword in hand up to the batteries, shells were bursting and scattering widely as they left the muzzles.

And while they were ploughed by the shells, the horsemen also rode through a whirl of machine-gun fire. But they spurred right home, sabred the gunners as they served their pieces, and then, re-forming under Cheape, dashed at a nest of machine-guns and killed the crews. In this fine gallop the yeomanry lost heavily; but they were well rewarded for their sacrifice, capturing 11 gun, 3 machine-guns and 30 prisoners (pp 443).

Gullett goes on to write that this charge had taken place in full view of the Australians who were quick to appreciate the fact that the British Territorial horsemen could no longer be estimated lightly as campaigners.

In further fighting on the 8th of November, Gullett’s account reveals that the brigade took several guns in the afternoon. An extract follows:

One of these was galloped by a patrol under Lieutenant G.L.H. Mueller, (9th LH) and the team of bullocks was shot after all the efforts of the Australians to drive the little Turkish bullocks had failed (pp 447). Darley writes that this was probably due to bullocks not understanding the language of the wild and woolly Australians or the terms of endearment lavished upon them. Gullett continues:

Lieutenant W.H. Lilly (No. 1 Sqdn AFC) of the machine-gun squadron, advancing boldly with two guns, destroyed the team of another, and afterwards co-operated with Lieutenant F.J. MacGregor, of the 10th Light Horse in the capture of a third. This gun, a 5.9-inch howitzer was in action against the Australians at a range of 1600 yards, and MacGregor saw the enemy bring up teams for its withdrawal; he therefore, with Lilly covering his advance with a machine-gun, rode forward with four men, captured a German officer with the crew of the gun, and under heavy fire shot the team of animals.

Lieutenant L.M.S. Hargrave of the 9th Light Horse, with his troop, supported by Lieutenant P.T. Smith (9th LH), had a similar fight for a 15-cm. Gun. The Turks advanced in strength to save this piece, but were held up by the fire of the troopers, while Hargrave and Smith, charging mounted with a small party, destroyed the team. Two other guns, retreating north-west from Jemmameh, were pursued by Lieutenant Borbidge of the 8th Light Horse. Riding up close under fire, Borbidge dismounted his troop. Shot the team of one gun, and forced the second into a wady, where it turned over. Both were captured.

These accounts provide some insight into the action surrounding the capture of the five point nine on display at Melbourne’s Victoria Barracks. There are similar trophies in RSLs, parks and barracks right around Australia, yet how much do we know about the history of these pieces. There will be plenty of interesting research ahead for those willing to investigate further.