Billy Sing was a cold-blooded killer. This ace Australian sniper cut down 150 Turks. To the Anzacs in the trenches he was “The Assassin”… On Wednesday, May 19, 1943, William Edward Sing died alone in his room at the house where he boarded in West End, Brisbane… with five shillings… a man whose name was once known to an army and a nation.
by Brian Tate

As the northern summer intensified in June 1915, the Australian Fifth Light Horse Regiment was allocated as its area of responsibility, the ground around what was soon to be called Chatham’s Post.
It was a Queensland unit and its officers and men were primarily from the country areas.
Private William Edward Sing, like most of his fellow members of the Regiment, had grown up and worked with horses in the Australian bush. Part of their cumulative stock-in-trade was an ability to ride well, estimate distance carefully, track strayed stock and animal pests, and to fire both rifle and shotgun accurately.

Sing’s considerable skills with a rifle were well-known in his central Queensland home district, even before the outbreak of World War One. He was a member of the Proserpine Rifle Club and a leading kangaroo shooter around his home town of Clermont (about 250 km south-west of Proserpine). Sing signed his enlistment papers at Proserpine on October 24, 1914, two months after the outbreak of World War One. He became a member of the First AIF.
Another recruit from North Queensland was Ion “Jack” Idriess (the author of “Desert Column”, “Cattle King”, “Lassetter’s Last Ride”   and many other books on Australian  history), who later became his spotter in the Gallipoli trenches.
Billy Sing travelled by ship to Brisbane. After a brief period of training, during which he was allocated to A Squadron of the regiment, the ship set sail for Egypt. It was five days before Christmas 1914.
The men of the Fifth Light Horse chaffed at the bit during April, 1915. They cooled their spurred heels on the Egyptian desert, while a few hundred kilometers away their infantry colleagues were creating Australian history at Gallipoli.
Finally, the rising casualty toll on the peninsula saw Sing and his mates embark for the Dardanelles on May 16.
For the first month, the Lighthorse men were scattered through the Infantry Battalions to gain some experience. But, by mid-June, the men from the Fifth Light Horse had farewelled their foot-slogger comrades and rejoined their Regiment, when it moved to the seaward side of Bolton’s Ridge.
In honour of a young English-born Lighthorse Officer, the new position was called Chatham’s Post. It was here that Billy Sing began in earnest his lethal occupation.
The sniper’s daily modus operandi began with his taking up his ‘possie’ in the predawn darkness. This, and the fact that he rarely left the area until well after dusk, ensured that usually there was no tell-tale movement near him during the daylight hours.

Once Billy and his spotter were in position and had settled in, the true discipline of rigidly maintaining a quiet and motionless patience began. This was not a job for fidgeters. It demanded infinite resolution, an almost unconscious yet alert tranquillity. And the steady pursuit of professional perfection – snipers rarely get a second shot at a specific target.

The equipment available to the Australian snipers at Gallipoli was basic and, in some cases, nothing more than the standard-issue Short Maga

zine Lee Enfield (SMLE) No. 1 Mark III .303 calibre rifle.
However, there is evidence that some former rifle club members were allowed to take their own privately purchased weapons with them when they left Australia. Similarly, some of these same sporting shooters used rifles which had been fitted with various target and peep sights, primarily the “Lattey optical sight”. But, in the end, the fundamental qualifications were, and still are, an above-average eyesight and a cold-blooded resolve.
Billy Sing, a methodical man, encompassed, exemplified and expanded upon all of these characteristics. His uncompromising commitment and business-like approach impressed the British commander, General (later Lord) W.R. Birdwood and other senior officers.

Major (later Lieutenant-Colonel) S. Midgely of the Fifth Light Horse, once candidly asked Billy how he really felt about killing men in cold blood. Sing replied that shooting “the illegitimates” had not caused him to lose any sleep. It was steely comments like these – and prominent personalities such as Billy Sing – that gave Australian commanders on Gallipoli opportunities to boost the morale of battle-weary troops.
It was probably with official blessing that word of Billy’s steadily mounting macabre tally was passed mouth-to-mouth like a cricket score, along the Allied trench-lines. Each day, Sing’s persistence, resolve and unerring accuracy brought a bereft wailing to households and families throughout Turkey during the campaign of 1915.
It was careless soldiers, as well as raw Turkish reinforcements, who presented easy targets of opportunity for the Anzac snipers. The nervous curiosity of these new-comers compelled them to snatch quick and often fatal glances over the parapet toward the Australian trenches. The actual area presented by their momentarily exposed bodies was minimal from the front. But it was the view from the flanks of the zigzagging trenches that gave a chance to the waiting Allied marksmen. 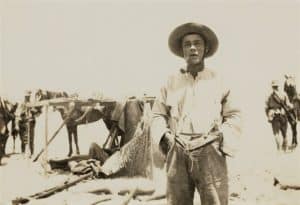 The world of the sniper of Gallipoli was appropriately described by Idriess as being like a cat watching a wall with many mouse holes. Behind the holes worked the cautious mice, with ever-watchful felines waiting for just one mistake.
As the campaign moved on and Sing’s persistence and accuracy took their toll, it was inevitable that a response would come from the Turks.
At first, orthodox military methodology was applied to put an end to the Australian who had taken out as many as nine of the enemy in a single day. One such Turkish reaction saw Sing’s growing confidence shaken by a very near miss, one quiet morning in late August at Chatham’s.
Billy and his observer, on this occasion, Trooper Tom Sheehan, sat silently surveying the enemy trenches, waiting for an unthinking mouse to appear. Their eyes and telescope swept the ground to the front, seeking the almost imperceptible giveaway signs. A quick hazy puff of vapour from a weapon discharge, the unguarded tell-tale movement of an arm or a body.
A Turkish marksman with a similar intent seized upon a sudden and inadvertent movement in the Australian sniping team and fired on them. His shot passed through Sheehan’s telescope, end to end, wounding the    Australian in both hands, before entering his mouth and coming out his left cheek. The almost-spent bullet travelled on, completing its pernicious run by striking Sing in the right shoulder.
Begrudgingly, the famed sniper would have been impressed by the Turk’s skill or freakish luck. Tom Sheehan was evacuated to Australia to reflect on his own mortality. It was another week before Billy Sing was physically and psychologically able to climb back up to his elevated “possie” – and face the newly respected Turkish snipers once more.
The next attempt by the Turks to clear their left flank of the unrelenting Australian sniper was more formidable.
Reports of these efforts came to light later, from accounts by Turkish prisoners, as well as translated extracts from diaries removed from the bodies of their dead.
The Turks sent for their own champion near the centre of the front line.
Already decorated by the sultan for his proficiency, the Turkish sniper -whom the Australians called “Abdul the Terrible” – probably relished the challenge.
Abdul brought with him a determination which matched Billy Sing’s. The Turk’s hunt to locate his Anzac counterpart’s position took on the professional vigour of a forensic scientist. Each fresh description of yet another sniping victim would see Abdul quickly sent to the spot. Here he would thoughtfully examine the crime scene.
There was an inexplicable ability by the Turks to separate the indiscriminate good fortune of some of the Anzac shooters from the true craftsmanship of the sniper Sing. Accordingly, the only reports passed on to Abdul were those confidently assessed as having been the work of the deadly and unseen Australian rifleman.
Reconstructing each fatal shot, the Turk determined the bullet’s angle of trajectory from the entry and exit wounds. And he studied the exact position and stance of the latest victim at the moment of impact, as recounted by those who stood nearby.
With each calculation, the Turkish sniper drew with his eye a line which ended at an area of the Australian trenches on Harris Ridge. Eventually a pattern began to emerge.
His gaze consistently returned to fix on one specific location, a small rise on the heights at Chatham,s Post. At last he had found the lair of the too-efficient Australian killer.
Mirroring Billy Sing’s pre-sniping preparations, the Turk selected a suitable sight. In the darkness of each night, he built his own position. When it was finished, Abdul – like his Australian adversary – took up his post each morning well before dawn. Many days were spent simply watching and waiting.

by Brian Tate
From the Courier Mail Weekend, Saturday, April 24, 1993.