Bob Peters was an eighteen year old grazier when he enlisted at Cootamundra NSW on 29th July 1915. He arrived in Egypt with the 11th reinforcements for the 1st Light Horse Regiment.
He was severely wounded in both legs at Romani in August 1916, when his patrol, led by 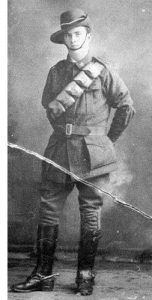 He was captured by the Turks and then began an agonising 300 mile trip in a dreaded, swaying cacolet of the camel ambulance, north along the coast road. They could only travel at night as the Royal Navy patrolled the coast and shelled all movement.
At Adina, Bob woke up one morning to find a wounded English Yeomanry soldier, Horace Mantle, lying on the ground beside him. Later, Bob was present when an Armenian doctor amputated Horace’s fly blown and shattered arm. The amputation was performed while Horace was lying on the ground under a palm tree in a waddy bed. Bob stayed with Horace nursing him back to heath as they moved back to Turkey. A lifelong friendship was forged.
Bob’s worst memory as a POW was when he was placed in the Florence Nightingale Hospital in Constantinople. A German surgeon came through his ward inspecting the wounded and pronounced amputations for the two men before Bob. However, after examining Bob’s poisoned legs, he recommended treatment, and Bob believes that the massive applications of iodine ordered by the doctor saved him.
Horace Mantle was sent back to England as part of a prisoner exchange programme. When Turkey surrendered, Bob returned to Egypt, and then went on to England for a great meeting with Horace’s family in Kidderminster.
Throughout World War Two, Bob arranged the well-known Sydney store, Grace Brothers, to send a food parcel to Horace each month. Bob always said that Horace was the toughest man he had ever met. He was forever mindful of the time when smallpox reduced him from 11 1/2 stone to 7 stone, and Horace sold his precious boots, in spite of snow and ice, to buy nourishing food to keep Bob alive, as the prison rations then were terribly poor. 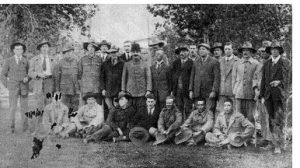 Horace eventually became manager of a Kidderminster carpet factory. After World War Two, Bob tried to persuade Horace and his wife to take a trip to Australia but they insisted they couldn’t afford the passage. In 1954, Bob and Elsie Peters decided that they would sail to England instead, and all enjoyed a wonderful reunion there.
One of Bob’s favourite war stories was about Sergeant Jock Davidson who had been wounded at Gallipoli. When his Light Horse mates visited him in an English hospital in Cairo, he told them, “You’ll have to get me out of here. They’re giving me a hard time as the doctors don’t like Australians”. Jock’s mates told him not to worry and they’d fix it up.
Next day, they arrived with horses and a wagon, four lengths of rope and pulled up under the hospital verandah. They went upstairs and attached a rope to each corner of Jock’s bed and lowered him over the balcony and onto the wagon. The guard at the gate threatened to shoot, so they whipped up the horses, which galloped past the gates in a shower of dust. They arrived safely at the Australian hospital with bed and patient, and never a word was said.

Photos and information from son, Bob, for the Winton Troop.