Malcolm Dingwall, the son of schoolteacher, was born on 24th August 1891 at Burrawong, NSW. Being an adventurous young man, he took a boat to Townsville and ravelled to “Yelvertoft”, west of Mt Isa. Here he worked as horse tailor for the carrier carting wood to fuel the steam engine running Yelvertoft Bore.
In the Gulf, he worked as a stockman for the legendary Quilty family at “Oakland Park” and “Euroka Springs”. Later, he worked on “Dalgonally”, and “Fort Constantine” outside Cloncurry where he joined up in September 1915. The troop train, which left Cloncurry was only half full, but by the time it left Townsville for Brisbane, not another man could fit in.
He embarked from Australia for Egypt on 31st January 1916, and joined the 5th Light Horse Regiment at the camp at Maadi, which was 10 miles from Cairo.
Malcolm Dingwall never talked much about his experiences during the war, and only ever referred to the funny happenings. He said they were told by the officers to make a lot of noise when charging to frighten the Turks. during some periods, Malcolm was involved in railway construction at Rafa and Dur el Belah.
He embarked for Australia on the “Port Sydney” on 4th March 1919 and was discharged on 13th June 1919. Returning also on the “Port Sydney” was another 5th Light Horseman, Bill Barnes, who had been wounded. Many years later, in Mitchell, Qld, Malcolm was to meet up again with Bill Barnes and fellow 5th Light Horsemen, Dick Mouritz, Harry Bunton and Jim Burke.
Bill Barnes always said that he spent his time during the war either breaking in remounts with mad Jim Burke, or else in the front line fighting with mad Harry Bunton. Jim Burke solved the problem of shoeing a fractious horse by hobbling, pulling the horse over and shoeing it on the ground. 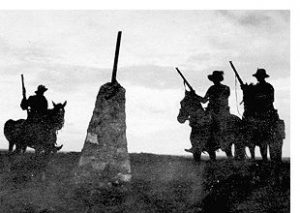 After the war, Malcolm caught a train to Yuleba, Qld and, with two horses, went mustering on “Myall Downs” at Roma. In 1920, he took up an offer for Returned Servicemen of a 1000 acre block off Mt Hutton near Injune. These blocks were virgin Brigalow scrub and many of the ex-soldiers discovered they were too small to make a living. However, Malcolm persevered and eventually acquired addition blocks to have an area of 5000 acres on Injune Creek, west of Gunnewin Siding on the Injune – Roma rail line, which he called “Dynambarin” – an aboriginal name for “many yams”. He lived there for the rest of his life.
In December 1926, he married English lass, Rosabell Branch, who had migrated with her parents in 1914. Together they reared 2 boys and 3 girls on “Dynambarin”. To supplement his cattle income, Malcolm went tank sinking around the district for 10 years, with his 2 sons, Keith and Allan, as offsiders. Draught horses dragged the wheeled scoops and malcom bred his own horses and at one time, had up to 60.
Malcolm Dingwall, bushman and light horseman, died following a stroke on 21st September 1984, at the grand age of 93.

Contributed by the Dingwall family of Roma and Mitchell.