Obituary
Gallipoli veteran. Born Sydney, May 9, 1897. Died Perth, February 24,1999, aged 101.
Some people are fortunate enough to experience one great defining moment, when they are touched by something larger than life; but it is rare to experience more than one. 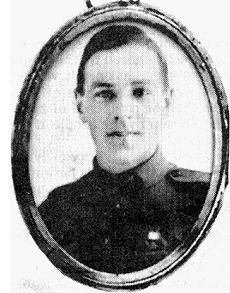 Len Hall was touched by the hand of greatness three times, and the hand of epic romance once.
He landed at Gallipoli with the Anzacs, where he fought as a machine-gunner during the heroic assault on the Nek. He helped capture Beersheba in 1917, riding in the legendary charge by the Light Horse Brigade of the Desert Mounted Corps. And he rode with Lawrence of Arabia to liberate Damascus in 1918.
Then, on his return to sleepy Perth in 1919, he married a woman who four years earlier had accepted the feather from his slouch hat.
According to Lawrence of Arabia, the Australian Light Horse regiments of the Anzac Mounted Division who rode with him into Damascus were among the best riders in the world. Hall was one of “a band of sporting Australians . . . who saw the battle as a point-to-point with Damascus as the post”.
Impressed by the riding skills of Hall and his mates, many from the bush, Lawrence wrote in The Arab Revolt (1927): “With no better horsemen available, I deployed these fearless Australians to the north and west of Damascus to lead the charge into the city ahead of the slower British, confident the Australians would force a surrender.”
His faith was well placed. The lighthorsemen, many on well-groomed mounts maintained by bush poet Banjo Paterson in his role as army stable manager, helped capture Damascus, forcing out the occupying Turks.
That night, Lawrence wrote: “Damascus went mad with joy. A quarter of a million souls poured into the streets with the men tossing up their tarbushes to cheer, women tearing off their veils and householders throwing flowers on to the road before us.”
Hall had enlisted in 1915 after an officer heard him playing the bugle and begged him to join up because the 10th Light Horse needed a bugler. He was just 16, so he exaggerated his age, donned an oversized uniform and sailed for Egypt, practising his bugle en route. But he had to leave his bugle behind for Gallipoli, where his role was to operate a Vickers machine-gun. He fought in campaigns such as the Nek until the evacuation from the Gallipoli peninsula.
Having “learnt to stay on a horse” during training in Egypt, General Harry Chauvel, the first Australian officer appointed to command troops in World War I, put him through his paces.
“He made me ride a pretty tough tent pegging course,” Hall recalled, “but I managed to get through and he just said, ‘You’ll do, son’”.
During the Beersheba charge, Hall was injured by a bomb dropped from a German aircraft that killed nine of his 14-man mounted gun crew and his horse, Q6.
“I was really sorry to lose that horse as Sir Sidney Kidman the “Cattle King” gave it to me and it was a wonderful horse,” he said. It was after winning his colours in the charge that Hall was patched up and selected by Lawrence for the assault on Damascus.
Hall was undoubtedly lucky to survive. At Gallipoli, 879 of his fellow diggers were killed, and Hall was especially vulnerable as lead machine-gunner in the impossible assault on the Nek, a steep hilltop Turkish gun position.
“I only survived because I had a really good Vickers machine-gun,” he explained, “and this stopped me getting hit. It was a very fast gun.” At least 400 of the 600 who charged the Nek that day were not so lucky. Apart from the landing itself, more Australian lives were lost at the Nek than at any other stage of the Gallipoli battle. As war historian C.E.W. Bean described it: “The dead lay so thick on the ground, the only respect retreating diggers could pay them was not to tread on their faces.”
But Hall bore no grudges against his foe. Revisiting Gallipoli in 1990 for the 75th anniversary, he told me: “I had nothing against the Turks. They are good people. I respect them.

They were  just defending their home ground. In fact, 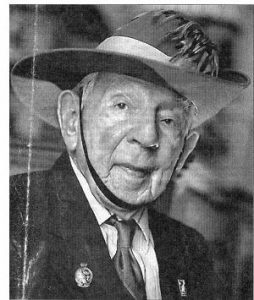 I would  fight for them next time rather  than fight against  them.”
In fact, Hall turned out to be as much a romantic  as he was a fighter. When he rode out to the  Fremantle wharf to board his ship for Egypt, he  plucked the emu plume from his slouch hat and  thrust it into the hands of a girl waving in the  crowd. As he marched back into town four years  later, a woman stepped forward saying: “Excuse  me sir, would you like your plume back?”
Hall fell in love with the caretaker of his feather,  Eunice Lydiate, and they were married two years  later. They had two children, Frank and Leonore.
Between the wars, Hall worked as a country  grocer before starting a career with the  Postmaster-General, the forerunner of Australia  Post and Telstra, working as a telephone  technician and then as a postmaster at Hamelin  Pool, between Geraldton and Carnarvon on the  West Australian coast.

He relayed messages  during the World War II  battle between HMS  Sydney and German ship  Kormoran in which the Australian ship was sunk with the loss of all 645 aboard.

When Hall retired, he and Eunice travelled to Europe, returning to the battlefields of his youth, including the trip to Gallipoli for the 75th anniversary of the campaign. Later, when Eunice fell ill, Len nursed her until she died in 1996, aged 96.
Hall’s death means Australia has lost its last living link with Lawrence of Arabia.
Len Hall is survived by his two children, three grandchildren and five great-grandchildren.