The gun was manufactured in the Skoda factory in the dying days of the Austro-Hungarian Empire. It was purchased by the Turkish Ottoman Empire, also in its sunset, and sent by the Turkish Army to Palestine.

In Palestine it was captured by the fledgling Australian Army 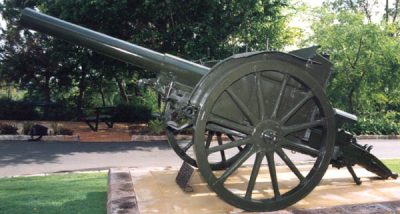 during one of the last cavalry operations in the world. Its part in “finalisms” in history is quite extensive and interesting; and in military operations almost unique.

When first reading the commemorative plaque, we see that Brigadier-General Lachlan Chisholm Wilson (1885), a veteran of the Boer War, is credited with capturing the gun when he commanded 3rd Lighthorse Brigade.

In the world of military discipline, the commander will nominally and actually be responsible for all acts of his command. If there is a disaster there will be recriminations; if there is a victory he will take the credit. However, General Wilson personally captured the gun outside the fortified town of JENIN on 20th September 1918. The main battle had been found on 19th September 1918 and the Turkish defences by the 20th were effectively overcome. On 20th September, Brigadier-General Wilson, his Aide-de-Camp Lieutenant Hammond and Orderly Trooper Higgins, were on the outskirts of Jenin – one presumes the General himself was reconnoitring. He came upon a detachment of 40 Turkish soldiers and the field gun and they quietly surrendered both themselves and the gun to him. Despite the lack of resistance, this is one of the few occasions in military history where a General Officer personally captured enemy soldiers and equipment. The event is recorded in 3rd Lighthorse operations as follows:

“…At dawn, while looking around the outskirts of the town in the neighbourhood of the railway station, the Brigadier, ADC, and orderly came upon a batch of 40 Turkish soldiers and a 10cm gun. The former were waiting quietly to be collected. This was duly done by a few men from the 9th Lighthorse regiment who were sent for…..”
Thus the gun was captured.
The gun is now located at the Brisbane Grammar School, Gregory Terrace, Brisbane.