My father and two of his brothers were Light Horsemen who took part in the world’s last great cavalry charge at Beersheba during World War One.

They were three of the 11 sons of John and Margaret Dwyer of Galong Vale, a sheep station at Beanbri near Walgett. The twins, Pierce Ignatius and William Augustus and their younger brother Fonce – Vincent Alphonsus – joined the First AIF on the same day and took their best stockhorses with them to the 12th Light Horse Regiment. 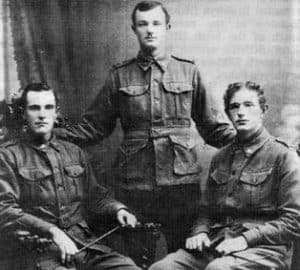 The three left Beanbri railway siding with a send-off dutifully reported by Walgett town’s newspaper which recorded that landholders and their families from miles around took part. In those days brothers could be in the same platoon of the same battalion of the same regiment. The practice, after the losses in the First World War, was abolished early in World War Two.

The Twelfth Light Horse trained in Egypt and in the Middle East took part in the battles of Katia, Romani and the famous charge for the watering wells at the biblical Beersheba. Fortunately the three brothers survived, especially the vital victory of Beersheba, so graphically described, in his book on the Light Horse, by author Ian Idriess.

Military historians say the regiment played a vital role in turning the battle from a stalemate to a conquest that enabled the men to rest and the horses to water (there was no other). It was also a vital stage in the final victory in Palestine.

Pierce, Will and Fonce were all close to the action at Beersheba. Will had the heel of his boot shot off, Pierce took a shrapnel graze and Fonce suffered a flesh wound to the arm.

They were repatriated to Australia where each, after demobbing, returned to grazing. Fonce went to Quilpie in Queensland where he called his property Romani, after the battle he took part in. Pierce did the same with land he held near the opal mining settlement of Grawin. Will also went to Quilpie but didn’t name his property after their shared battle.

I, Norma Scull of Bensville, am the only child of Pierce. Fonce’s son Noel lives in Brisbane. Will never married.

My mother’s brother, James O’Brien of Come-By-Chance in north west New South Wales, also served as an infantryman in the Great War and took part in the battle of the Somme.

FROM A NEWS-CLIPPING
SUPPLIED BY NORMA & KEN SCULLY