The Light Horse Charge at Beersheba

“Then Abraham reproved Abimelech because of a well of water which Abimelech’s servants had seized… And he said, You will take these seven ewe lambs from my hand, that they may be my witness that I have dug this well. Therefore he called that place Beersheba, because the two of them swore an oath there.”
Genesis chapter 21 verses 25 -31
See also Beersheba, a genuine photograph of the charge?
See also Photographs of Australian Light Horse going into action at Beersheba.
The village of BIR SABA lay on the northern edge of the Sinai Desert in a shallow saucer at the foot of the judean Hills, Beerhseba was protected by Tel El Saba, a 300 metre feature on the northern bank of the Wadi Saba 3 kilometres to the east. It was a great mound which had a commanding view of the surrounding plain. The Wadi ran across the south of the town from east to west.
The enemy was Turkey, Imperial Germany’s eastern ally. They held the line, Gaza-Beersheba. At Beersheba were the 27th Division and Battalions from the 16th and 24th Divisions, supported by artillery. The enemy’s defence extended from Tel El Saba on the eastern flank. Two lines of trenches were dug into the cliff face of the Tel. A series of inferior trenches extended along the Wadi; they were not protected by wire. These extended to a group of detached trenches on the south-west flank. The enemy had good zones of fire.
General Sir Edmund Allenby commanded the British Eastern Expeditionary Force of two corps.
Lt-Gen Sir Harry Chauvel commanded the Desert Mounted Corps. He had no misgivings about his troops; they had sheer quality, leadership and experience; many had been at Gallipoli. These men of the Light Horse were without peer.
Lt Gen. Sir Philip Chetwode commanded the British XX Corps. He had defined the Gaza – Beersheba line.
Chauvel’s Desert Mounted Corps were to capture Beersheba.
Chauvel’s orders were to straddle the Beersheba-Hebron Road at Sakati 8 kilometres north-east of Beersheba, capture Tel El Saba, then storm the town. The mission was to be executed on the first day of the battle.
He had two divisions, each of three brigades. The ANZAC Mounted Division (ANZACs) included the 1st and 2nd Australian Light Horse Brigades and the New Zealand Mounted Rifle Brigade.
The Australian Mounted Division included the 3rd and 4th Austrlian Light Horse Brigades and the 5th (British) Yeomanry Brigade. In support were the Light Batteries of the Royal Horse Artillery.
The Battle of Beersheba was to be a three-phase operation supported by the British. The first phase was to be a night ride from wells at Asluj and Khalasa 20 kilometres to the south in the Sinai, to positions south and south-east of the town. In the second phase, the 2nd Australian Light Horse Brigade was to advance to Sakati and act as a cut-off force. The 1st Australian Light Horse and New Zealand Mounted Rifle Brigades were to capture Tel El Saba. Finally, with the road and Tel secure, the ANZAC’s were to storm the town. This did not eventuate. This was the most significant factor in the Battle of Beersheba, forcing Chauvel to commit his reserve – the Australian Mounted Division. In a preliminary operation, the British Infantry of XX Corps were to secure positions to the south-west astride the Khalasa-Beersheba Road.
At Asluj and Khalasa the men of the Desert Mounted Corps watered; they carried three days rations. Despite great loads, the horses were touched with excitement. Smoking was forbidden and talking subdued. The bare hills of Sinai sounded with the beat of thousands of shod horses. They rode 30 kilometres through the night.

Battle of Beersheba Map of Advance 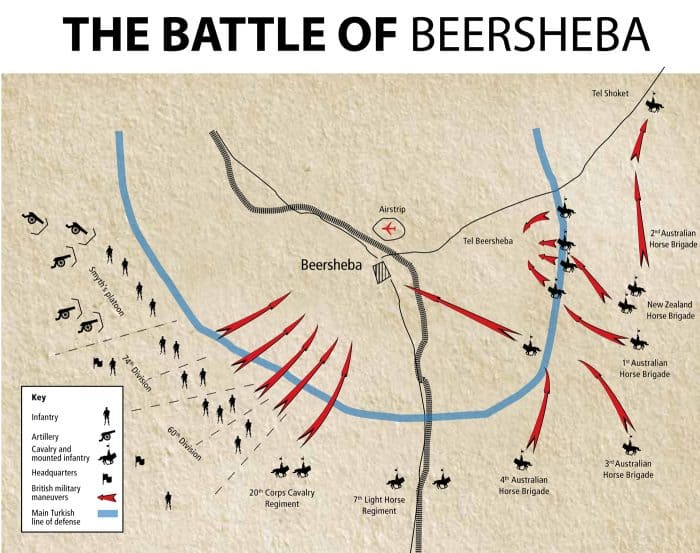 ◄ Back
Next ►
Picture 4 of 4
30th October 1917
1800: Asluj and Khalasa were cleared.
31st October 1917
0555: 100 British guns opened in support of the preliminary operation.
0700: The Desert Mounted Corps halted, and patrols were pushed forward. Beersheba with its mosque was clearly in view; it offered no prize in rations or quarters, but something more coveted were the ancient wells to water those parched men and their Waler mounts. A large pool could be seen shimmering in the Wadi; there had been a storm on the 27th.
0830: The British rushed forward and captured their objectives to the south-west and brought forward their guns.
0900: The ANZAC’s were ready to seize the road and the Tel. The enemy was observed reinforcing the Tel.
0930: The 2nd Brigade moved into artillery formation, advanced through a Bedouin camp, and thundered to the Hebron Road Sakati without slackening. Turkish batteries fired, but formation and ground gave them protection. With this task accomplished, they remained in a Wadi for the day.
1000: The Somerset Battery opened up on Tel El Saba from 3000 metres to cover the ANZAC assault. The 3rd Australian Light Horse Regiment was ordered to attack from the south-east. A spirited gallop under heavy fire brought the 3rd to within     1500 metres of the enemy. They dismounted. The Auckland Regiment conformed to the north. The Inverness Battery gave covering fire to the Somersets as they galloped to within 1000 metres of the Tel. The ANZAC’s were severely punished but they continued their advance, eventually bringing effective Hotchkiss fire onto the cliff. The prospect of the 3rd scaling the 200 metre cliff was not good, so they gave full opportunity to the Aucklanders.
1300: The 2nd Australian Light Horse Regiment was ordered to support the 3rd. They advanced at the gallop, dismounted and rushed their horses back so quickly that the enemy though they had retreated. They fired on the horses; this enabled the 2nd to advance unharmed. Meanwhile, the 3rd had gained the bank. The Wellington’s were thrown in to support the Aucklanders. The enemy was now under heavy fire.
1500: The New Zealanders rose and dashed up the slopes with the bayonet. The 3rd continued, but the Aucklanders were first in. Some Turks surrendered; others fled into the town. The 2nd and 3rd gave chase then fought off a counter-attack. At last the ANZAC’s had secured the Hebron Road and Tel El Saba. Chauvel had not expected to lose as much time. He had already detached the 9th and 10th Regiments from the Australian Mounted Division in support of the ANZAC’s.
1430: With the day on the wane, it was now neck or nothing; the time had come to commit the reserve. Chauvel issued decisive orders for the occupation of Beersheba. Brig. Grant of the 4th Australian Light Horse Brigade and Fitzgerald of the Yeomanry were at Headquarters; they pleaded for the honour of the charge. Put Grant straight at it was Chauvels terse order.
1630: The 4th and 12th Australian Light Horse Regiments drew up behind a ridge. From the crest, Beerhseba was in full view. The course lay down a long, slight slope which was bare of cover. Between them and the town lay the enemy defences. The 4th was on the right; the 12th was on the left. They rode with bayonets in hand. Each drew up on a squadron frontage. Every man knew that only a wild, desperate charge could seize Beerhseba before dark. They moved off at the trot, deploying at once into artillery formation, with 5 metres between horsemen. Almost at once the pace quickened to a gallop. Once direction was given, the lead squadrons pressed forward. The 11th Australian Light Horse Regiment and the Yeomanry followed at the trot in reserve. The Turks opened fire with shrapnel. Machine guns fired against the lead squadrons. The Royal Horse Artillery got their range and soon had them out of action. The Turkish riflemen fired, horses were hit, but the charge was not checked. The Lighthorsemen drove in their spurs; they rode for victory and they rode for Australia. The bewildered enemy failed to adjust their sights and soon their fire was passing harmlessly overhead. The 4th took the trenches; the enemy soon surrendered. The 12th rode through a gap and on into the town. Their was a bitter fight. Some enemy surrendered; others fled and were pursued into the Judean Hills. In less than an hour it was over; the enemy was finally beaten.
From his headquarters, Chauvel had watched the battle develop. He saw the New Zealanders swarming the Tel; on their right the 9th and 10th LH Regiment were trotting in pursuit under shrapnel. On the Wadi the 2nd and 3rd LH Regiments were pressing forward in their attempt to take the town from the east. The Royal Horse Artillery were firing in support. Then over the ridge rode the 4th and 12th . . . shrapnel . . . the signal to charge! Not for almost an hour did Chauvel learn that Beersheba had been won.
Then disaster. The 9th and 10th in pursuit were bombed by a lone German aircraft; they suffered heavy casualties. The Desert Mounted Corps watered at the wells of the patriarchs and in the pool. For days, the charge was the talk of the camps and messes.
The Australian Light Horse had galloped into history.
South Australians can be proud of the contribution of the 3rd and the 9th in the Battle of Beersheba.
A Squadron 3rd/9th South Australian Mounted Rifles began as the Reedbeds Cavalry in 1841 and is privileged to have inherited the honors, the history and the tradition of the Australian Light Horse.