Lt. Col. William Charles Nightingale Waite, DSO, MC, VD, was such an old soldier that he outlived the era when the values he upheld so unwaveringly were held by young and old. The lean, tough man whom many called “Mr Anzac” because he led Adelaide’s Anzac Day parade 29 times on a dashing white charger, died, aged 93 on the 27 December 1973. 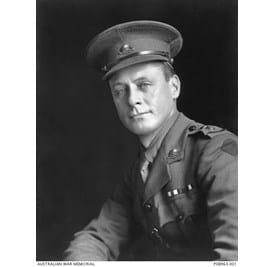 Lt. Col. Waite won the respect of a community in which, in his youth, the way for a man to ‘serve his country’ was to fight for it in war. He served and lived through three of them. He was born in Adelaide in 1880. When he was a schoolboy, first at St. Bartholomew’s Church of England School at Norwood and later at Prince Alfred College, he carried the dream of being a soldier. He was 19 when the Boer War came, straight as a die, and steely of eye then as he was to the last. He did not wait to find a good job in the contingent, but left with the first wave to Africa as a Corporal. He was not a Corporal for long. He was commissioned in the field and transferred to a mounted unit.
After 12 months campaigning in South Africa, young Waite came back to Adelaide, then returned to the fray with the 6th Contingent as a Lieutenant.
Lord Kitchener mentioned him in dispatches. He was awarded the Queen’s Medal with five clasps and the King’s Medal with two clasps. During the Boer campaign he became familiar with the Dutch language and he saw a business chance as an auctioneer when the war ended. So he stayed on and started business at The Springs, then an important mining centre 17 miles from Johannesburg.
He did well, because he could sell in both Dutch and English. Then he was offered a job in one of the biggest mines in the Rand. It had 67 miles of underground workings and employed 400 white men, 700 native South Africans and 4,500 indentured workers from China. He married, but within three weeks a major strike broke out so he sold out and returned with his bride to Adelaide in 1907. Here he worked as a city depot Manager for Walter Reynell and Sons and then for William Dean and Son as a stock engineer.
Then came World War 1. He was holding a stock sale when the news reached him. The soldier in him was stirred. He returned to Adelaide at once and left in November, 1914 as a captain in charge of the 34d Brigade Ammunition Column. They trained in Egypt until April, 1915, then went to Gallipoli. Waite stayed there until the final evacuation, commanding the 7th and 8th batteries. He was wounded twice and won the Military Cross at Lone Pine.
He was back in military harness in World War 2 as Deputy-Director of Recruiting in the 4th Military District at Keswick Barracks in 1940. In 1962, a veteran of 82, he was a delegate of the South African War Veterans Association to the Boer War diamond jubilee celebrations in London. He was due to sail from Outer Harbor at noon on April 25 of that year.
“You won’t have time for the march that year, Bill,” friends told him. “Miss the march?” he said, “Not on your life. I would rather miss the trip.”
But he missed neither. Because, as chief Marshall he was first off the mark, first finished and down to the harbour in a fast car in an operation of typical military precision.
SSgt “Mack” Hartman