The boy who denied his father for his country

The young trooper lay there, grimacing in pain. The doctors had done their best but now nothing could be done. As the padre sat alongside the bed, he held the lad’s hand.

Suddenly the soldier squeezed tightly and dragged the padre closer. “You make sure they get it right on the headstone . . . Please – make sure.” Then there was silence as the soldier’s hand went limp and fell to his side. The padre was puzzled and didn’t understand the young trooper’s request. 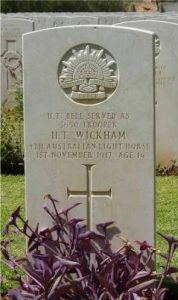 Harry was a boy of the land. Lean and wiry he stood 5ft 4 in and weighed a scant 8 stone. He worked hard on the family property in the tiny town of Walpeup, in northwest Victoria. School didn’t interest him much but the adventure of the outdoors did.

Level headed, a capable bushman, handy with a rifle and a natural with horses, Harry displayed all the attributes of the cream of Australia’s youth.

He admired the older blokes, the ones he saw at the local dances, courting the girls and those lounging against the verandah rails near the pub. He bubbled with youthful exuberance.

He had followed the progress of the war in the papers.

Many of the local men had joined the Light Horse and they strutted around town before their deployment overseas.

The cut of their tunics, the shining leather of the bandoliers, boots and leggings, the emu plumes ruffling in the breeze and a girl on each arm.

“This is for me!” Harry thought to himself.

By the light of the kero lamp, he would read the exploits of the diggers in Gallipoli.

The hair-raising adventures, the madcap charges against machine-guns, the hand-to-hand battles against incredible odds. It was everything he’d ever dreamed of.

Following the evacuation, he read of the desert war. Jifjafa, Romani, El Arish and Rafa. Horses and men working as one, charging across the dunes and getting stuck into the enemy.

He noticed too when blokes he knew came home, some minus arms, others legs, some blind.

Some didn’t make it home and their mothers, sisters or wives went about the town dressed in black, their eyes red through constant tears.

“Oh well, they are the risks you take,” the young lad thought to himself.

Harry knew his father wouldn’t let him go to war, so no use asking.

One night he packed his bag and placed a letter against the vase on the side table.

In it he said that he was off to do a bit of Jackarooing in Queensland and he’d write when he could.

He crept towards the back door, ever mindful that a creaking floorboard could give away his plan at any moment. At the door he paused, looked back one last time and then he was gone.

When his father awoke, he found the letter. Reading through the page he said to himself – “bloody little idiot”.

Harry presented himself at the Light Horse recruiting centre on March 17, 1917.

As he filled out the paperwork, he wrote in his name, Harold Thomas Wickham, age 21 and his next of kin – uncle, Thomas Bell – Walpeup, Victoria.

“You look a bit young, got a birth certificate?”

“No sir, it was lost in a fire a few years ago,” Harry replied.

“No sir, died in the fire. Got an uncle but we don’t talk much.”

“Alright, we’ll see how you go,” the officer said.

The other recruits cheered as they watched Harry put the horse through its paces.

Galloping to the finish, he brought the horse to a sliding halt and jumped off running, all in one fluid motion.

He was allocated first to the 13th Light Horse Regiment but this was later changed to the 4th Light Horse. Young Harry relished the closeness of military life. The men around him treated him as nothing but an equal.

Musketry, bayonet drills, navigation and drill. He thrived in the training and displayed the natural attributes of a born soldier.

He even had a grin when it came to mucking out the stables – just part of the job.

The only sad time came at mail call, for his name was never called out.

A further period of orientation and training was undertaken. But, most importantly, he was issued with his horse.

The pair soon got to know and trust each other, they enjoyed long rides in the surrounding desert and on returning to the lines, the trooper would take particular care in grooming his mount.

The lad was fair but firm and his trusty steed responded to his every command without hesitation.

They knew they were a team and they knew that they’d be a good one.

On September 19, Trooper Harry Wickham was taken on strength of the 4th Light Horse Regiment AIF.

Harry was assigned to a Hotchkiss machine gun section and also tasked with the care of one of the packhorses. He worked hard to master the new weapon and with another horse to care for, it just meant twice the fun.

The British and Anzac forces were preparing for action. They had attacked Gaza twice and twice they had failed. The Light Horse patrols seemed to be ranging further and further into the desert along the Wadi Gaza towards the fortified town of Beersheba.

Morning of October 28, 1917, Harry was tending to his horses. His corporal approached him.

“Harry, we move out late this afternoon, full marching orders, three days rations for man and horse, make sure the horses are fully watered before we go, don’t know when we’ll hit water again.” The NCO’s less than normal jovial mood told all.
“No problems corp, we’ll be ready,” the young trooper replied.

As the corporal walked away, Harry nuzzled into his two charges.

“Looks like this is it, eh. The real thing!”

At 4pm the Regiment was ready to move. The men waited with anticipation and then it came – the hand signal from the CO and they were off.

They rode through the night to conceal the dust. It was to be a silent march, no smoking, no talking. Aircraft buzzed around in the distance to conceal the noise.

The Fourth was only one Regiment among many. Thousands were being thrown into this battle, aimed to capture the abundant wells nestled within the heavily defended perimeter of Beersheba. They tried to get what rest they could during the day and were in the saddle again that night. The men had their water bottles but there was nothing for the horses. It was the same next day. The morning of the 31st they found themselves overlooking the town.

The Fourth and its sister regiment, the 12th, were held in reserve. The third regiment of the Brigade, the 11th, was off on another task.

As the battle raged, the Fourth and 12th lay in a sheltered wash out. Even though it was the end of summer, the sun still bore down fiercely on both man and horse alike. The men still had only the remnants of water in their bottles, as for the horses, their water lay either in Beersheba or the unthinkable, a 12 hour forced march to the rear.

The diggers watched as the shadows lengthened. “If they don’t take the town soon, we’re well and truly stuffed,” one said. The words stuck into Harry like a knife.

They shook out, covering off the pennants that marked their forming up place. Harry looked around, he could see the buildings in the distance and the broken, undulating ground between them and the town.

The regiments now straddled a road. The Fourth on the right, the 12th on the left. The 11th were trying to get back to them and if the soldiers arrived in time, they would be in depth.

The CO of the Fourth would lead both regiments. He pulled his hat down tightly on his head and raised hi shand. Harry looked at his corporall, who turned towards the lad and winked. A smile broke across the boy’s face. Then they were off at a slow walk.

As his horse became skittish, Harry rubbed its neck to let him know everything ws all right. He glanced over his shoulder where his pack horse, laden down with the weight of the machine gun and ammunition, followed obediently.

The pace now quickened to a trot, then increased to a canter. All the time the Turkish and German defenders adjusted the range of their guns in preparation to engage the horsemen when they stopped to dismount – then it came . . . one curt command. “Charge!” and they were off.

The enemy was taken aback. This wasn’t supposed to happen. They hurriedly twirled the handwheels in a vain attempt to depress the barrels of the guns. Then they gave their order. “Fire!”

The high explosive and shrapnel rounds blasted into the ranks of horsemen. Some were hit but most simply laid down further on their horse’s neck to gain whatever protection they could.

Harry readied himself as he approached the curtain of fire. Blam, Blam, Blam. Red-hot splinters whizzed around him. A strange mixture of fear, excitement, panic and glee overcame him. He laughed out loud as he spurred his mount to produce more and more speed. Suddenly there was silence they were under the guns.

He could see little orange flashes and could hear whistling overhead. “I wonder what that is?” Harry thought. His answer came all too soon, as a machine gun round smashed into his leg. He never thought such pain existed – the force of the round threw him from the horse. He bounced along the ground and came to a halt in the dirty, broken soil. The sound of thundering hooves warned him to cover his head as another wave of horsemen galloped over him.

He glanced down at his leg, it lay at a grotesque angle, the result of the bullet shattering his femur. Then things started to blur as he succumbed to the pain, which lapsed him into unconsciousness.

As he struggled to regain consciousness, he felt the warmth of morphine, interrupted intermittently by the sharpness of excruciating pain.

As the padre sat next to him, Harry asked how the regiment had fared. “We took the town Harry, and the blokes and horses are enjoying a good drink.”

Harry lapsed in and out of consciousness throughout the night. In the morning he was still alive but only just. The padre again called on him. “Make sure they get the headstone right,” Harry screamed, and with that the young trooper went limp.

The next day, Harry was buried in a temporary cemetery on the outskirts of the town.

Back home, Thomas Bell received a telegram from Army Headquarters. It informed him of the death of his ‘nephew’ Harry.

Bell wrote back to the Army to highlight their error. “I don’t have a nephew named Harry. I do have a son by that name but he couldn’t be in the Army, he’s only 16.”

WO1 DARRYL KELLY.
I FOUND THE GRAVE OF TROOPER HARRY THOMAS BELL ALIAS HARRY WICKHAM WHEN SERVING IN THE MIDDLE EAST. WHILE I CAN ONLY SURMISE THE EVENTS LEADING UP TO HARRY’S DEATH, I BELIEVE IT TO BE CHARACTERISTIC OF MANY UNDER-AGED AUSTRALIANS WHO FOUGHT IN BOTH WARS UNDER ASSUMED NAMES, MORE OFTEN THAN NOT WITHOUT THE PARENTS KNOWLEDGE OR CONSENT. AND YES, THEY DID GET IT RIGHT ON THE HEADSTONE.