Dispatches: “He is a very reliable NCO and shows plenty of dash and pluck, and is very cool under fire.” 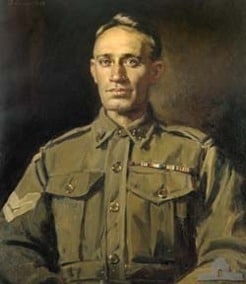 Edward Benjamin Picton, soldier and railway man, was born on 23rd July 1894 at Narrabri, NSW the eighth of the twelve children of Thomas Edward Picton, a drover and grazier, and his wife Mary Jane (nee Morrish).  He attended the local one room bush school, along with his brothers and sisters and a few other children, where he received a simple education before finding work on local farms, in the shearing sheds, and droving.  He was working as a carrier when he enlisted in the AIF on 29th October 1914.  On 19th December, he embarked with the 7th Light Horse Regiment and following training in Egypt, saw active service on Gallipoli with his Regiment during the following year.

It was in the Light Horse’s mounted campaigns in Sinai and Palestine that Ben Picton distinguished himself as an exceptional soldier.  He was promoted to Lance Corporal in 1916, to Corporal in 1917 and was wounded in action during 1918.  He was mentioned in dispatches and twice decorated for his bold work in a campaign in which very few bravery awards were made.  “He is a very reliable NCO and shows plenty of dash and pluck, and is very cool under fire.”

During the first battle of Gaza, on 26th March, 1917, Picton and three men galloped straight onto an enemy encampment and captured 40 prisoners.  In a similar incident near Beersheba on 31st October, he led a charge into the enemy’s position while most of his Regiment were held up by heavy shellfire.  Again he took about 40 prisoners..  For his bold and courageous work on these two occasions he was awarded the Distinguished Conduct Medal and the Military Medal.  The ribbons for the decorations were presented at a parade on 13th December 1917 by Major-General Chaytor, G.O.C. of the Anzac Mounted Division.

On 28th March, 1918, in the first battle of Amman, Picton received a severe wound which was to leave him with a permanent limp.  During his Regiment’s withdrawal he and another wounded man were left lying out in an advanced position which was over-run by the enemy.  Initially reported as missing in action, it was subsequently learned that he had been taken prisoner of war and sent on to Turkey.  Following the armistice signed by Turkey he was disembarked at Alexandria on 7th November 1918 for his return to Australia.

On returning home, Ben Picton was honoured by the citizens of Narrabri and eventually acquired a local property, “Rossmore”, an unsuccessful soldier settlement.  In 1920 he married Miriam Heather Annie Craig at St Lawrence’s Anglican Church, Narrabri.  There were six children from the marriage.  Failing to make good on the land, Picton worked as a bootmaker in some country towns including Tamworth and Lithgow before settling his family in Sydney where he joined the NSW Government Railways.

During the second World War, he enlisted in the Second AIF, being accepted despite his age and war disabilities.  He embarked for overseas with the 1st Railway Construction Company in September 1940.  He served as a Sergeant in Egypt and Syria before returning to Australia in 1942.  Because of declining health, he was transferred to the canteen service and for a while managed the Lady Bowen Hostel.

He was a Warrant Officer Class 2 when he was discharged on 16th October 1945.

He resumed work on the railway but his health deteriorated and forced his retirement in 1949.   Despite being one of the most decorated soldiers of the Australian Light Horse’s famous 1917-18 campaign, Ben Picton remained a modest man who lived quietly with his family, “a normal, everyday type of man who never expected anything more from life than what he had”..  In his later years he maintained an interest in gardening, fishing and ex-serviceman’s activities until his death on 28th January, 1963 from heart disease and pulmonary oedema.  His portrait above by Sir John Longstaff is in the Australian War Memorial.