Colin McLeod was a complete horseman whose expertise gained him renown and recognition both nationally and internationally, in all areas of equestrian endeavour. In the Sporting, Working, and Military fields his excellence was rewarded. This horseman was equally competent when driving the horse in harness, mastering the untamed horse, riding the spirited polo pony, educating the trick horse, or riding in the cavalry charge.

Colin McLeod was born in Sydney in the colony of New South Wales in 1893. His first occupation was as an apprentice jeweller with Angus and Coote in George Street, Sydney, but the open-air life appealed to him more so he “went bush” to work in the horse and cattle runs of outback New South Wales. 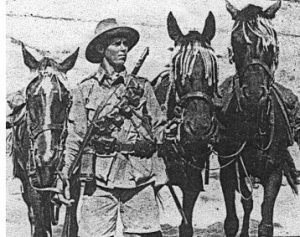 In 1915 after the outbreak of the First World War, he enlisted and joined the First Light Horse Regiment of the Australian Imperial Forces. He was posted overseas and joined the Western Front Forces in Egypt in January 1916. He saw service in the desert at Abbassi, Montazah, Ascar, Gaza, Kantara and Boulae and was engaged in battle zones until the conclusion of war in 1918. In one such engagement at Romani he suffered a bullet wound to his right forearm and was hospitalised at Montazah.

He was promoted to the rank of Sergeant in November 1918. He was mentioned in Dispatches and was decorated with the Croix De Guerre in recognition of his distinguished service during the campaign.

Upon his return to Australia his physical condition required him to go west to a drier climate. Accordingly he travelled to Western Queensland where he broke in horses in the Windorah area, including Galway Downs.

In the early 1920’s Colin returned to the coast and settled in the Tweed River Valley, N.S.W. where he was self-employed transporting cream from dairy farms in the area to the Murwillumbah factory. His carrying vehicle was a covered wagon drawn by horses driven five-in-hand, which was quite a feat considering the steep and winding mountainous tracks he was required to traverse.

During his years in the Tweed River Valley Colin’s horse riding feats became legendary. One Murwillumbah paper reported, “Squizzy Taylor, an outlaw who feeds on the hills of Bilambil had never before met such a rider and McLeod’s tenacity only urged him to greater efforts. Even the ring fence failed to stop him, he bucked clean over it, but McLeod was still on him when the other side was reached. This was enough for Squizzy who caved in meekly. The Judges, Stewards, and others assembled gave three rousing cheers for the plucky horseman.” 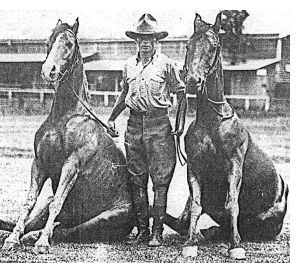 Colin subsequently started his own buckjumping show and travelled the Northern Rivers of NSW and SE Queensland, where he and his companions Billy Fitzgerald, Jack Morrissey and Queensland Jackie entertained audiences with displays of riding bucking horses and bullocks, whip-cracking, rope-spinning and rifle-shooting.

In competition Colin went on to win over fifty champion and first prizes including Australian and Queensland Championships. He was the only man who ever succeeded in riding the famous Warwick Outlaw Nickerbockerbuckeroo. He did so on two occasions, riding the horse to a standstill. It was on one of these occasions in 1930, at the famous Warwick Rodeo, that he was successful in winning the prestigious Australian Champion Buckjump Rider award. He was presented with a sash and the coveted silver cup.

Colin replaced his rough-riding days with a riding school conducted at Eagle Farm, Brisbane, where he had twenty quiet riding hacks available for his clients.

In 1934 Colin went as a horse-master accompanying a boatload or re-mount horses and polo ponies from Brisbane via Adelaide, Melbourne and Perth to their destination at Calcutta, India. At this point his consignment of horses were taken from the ship and loaded on a train he accompanied to Udaipur which is on the western side of the country. He remained as a guest of the Maharana in the Marble Palace on the man-made lake at Udaipur, whilst he broke-in and trained horses. He returned to Australia in 1935.

He then continued with his riding school at Brisbane and later this was relocated to Southport, until the outbreak of the Second World War in 1939 when he re-enlisted in the army.

Throughout the war years he performed valuable service as an organiser and officer of the First Auxiliary Horse Transport Company, which operated horse-drawn flat top wagons carrying goods from the Brisbane wharves and transporting them to the various Military Establishments in the metropolitan area. This was carried on during the height of the war in the Pacific when motor vehicles and fuel were very scarce.

In February 1942 Colin, then a Lieutenant of the First Garrison Battalion, was formally commended by Colonel A.L.P. Johnson, Infantry, Commanding, for quick and efficient action in respect of a fire in the Ammunition and Supply dump at Hedley Park, Brisbane.

Also during the war years Colin found time to write his recollections of having been a stockman and a Light Horse soldier. The manuscript was submitted to Smith’s Weekly, a well known and well read publication of the time. They printed it under the title ‘Night Horse’.

After the termination of hostilities Colin continued on with his riding school at Stevens Street, Southport, where his wife Linda and their family of two boys and three girls resided.

In 1947 with his second son Ranald, Colin travelled in his 1926 Armstrong Siddley utility to stations at Tambo, Augathella and Charleville breaking in mobs of horses which had accumulated during the war years. Machinery replaced horses and Colin returned to the coast where he was self-employed in a variety of occupations generally connected with horses.

In later years he resided on a small property at Greenbank near Brisbane where he enjoyed his horses as a hobby. In 1962 he took ill and was hospitalised with a terminal illness. He passed away on 30th December 1962.

Colin McLeod stood 5’10” tall. He weighed about eleven stone, had brown wavy hair and hazel eyes. He was a well-built, good-looking man with very strong arms. In 1936, as I walked home from school, my father came along riding a big grey horse. He leaned down and lifted me from the ground. He placed me on a small hessian bag containing a set of horseshoes tied to the pommel of the saddle. I thought the muscles of his forearms, which I gripped tightly with my fingers, were much harder than the iron shoes upon which I sat.

In 1988 I nominated my father for inclusion in the Australian Stockman’s Hall of Fame and his name was placed on the Honour Roll of Unsung Heroes, Certificate No 61.