“the least known distinguished man in Queensland”
…His leadership was put to a most searching test when ordered to lead the 2nd Light Horse Brigade in an advance along Harris Ridge under heavy enemy fire on 3rd November 1915. Five days later the position was taken. The highest point was named Wilson’s Lookout in his honour. It was 45 metres in advance of the Australian forward tunnel and only 20 metres from the enemy trenches…

Lachlan Chisholm Wilson was born at Brisbane in 1871. His father, Charles Wilson, was a pioneer sugar planter in the Logan District south of Brisbane and his mother was a daughter of Lachlan Chisholm, another pioneer of the district. Lachlan Chisholm Wilson completed his education at Brisbane Grammar School, where he was enrolled in 1885. Wilson did well at school and took a keen interest in rowing. On leaving in 1887, he was appointed to a clerkship in the Department of Lands, where he appears to have started legal studies and was called to the Bar on 3 December, 1895. On 12 November 1896, he joined the office of the Crown Solicitor in Brisbane, where he worked for three years under James Howard Gill, then Crown Solicitor.

In January 1900, both Wilson and David Buchanan, a school friend, volunteered to join the 2nd Queensland Mounted Infantry Contingent for the Boer War as troopers. The contingent sailed on the Maori King on 13 January 1900 and disembarked at Capetown on 24 February. They were in action soon afterwards.
With a number of other Australian Contingents, the 2nd QMI was absorbed into the 1st Mounted Infantry Brigade under the command of Major-General Hutton and served in the 3rd Mounted Infantry Corps. With this corps, Wilson and Buchanan took part in the advance on Pretoria and subsequently in operations at the Vet and Zand Rivers near Johannesburg, Diamond Hill, Riet Vlei and Zilikat’s Nek. For part of this time they were under the command of Major Chauvel. By November, under the command of Captain H. J. I. Harris (later to command the 5th Light Horse Regiment), they were in Machadodorp District. Later they were attached to Major-General H. W. Kitcheners Column, by which time both Wilson and Buchanan had achieved the rank of corporal. One of their last operations was at Swartz Kopje on 13 February, 1901; it was there that Buchanan was seriously wounded and Wilson was taken prisoner. According to an account in Smiths Weekly, Wilson was captured when he refused to leave the badly wounded Buchanan, risking his own life protecting his friend. They were released four days later in an exchange of prisoners.
Both Wilson and Buchanan returned to Australia with the 2nd Contingent when they completed their tour of duty, embarking on 31 March on the Tongariro. They arrived back in Brisbane and were discharged on 10 May 1901.
Wilson found good reason to settle in Townsville when he met the charming Nellie Grant Hartley, daughter of Robert Taylor Hartley, a north Queensland pioneer well known in both Cairns and Townsville. He married Nellie – the first of the Hartley girls to marry – in June 1903 at St James Cathedral, with W. S. Buchanan as best man.
Buchanan, however, was still restless after the Boer War and returned to South Africa in 1903, leaving the partnership. Though he returned to Townsville a few months later, in 1904, he did not rejoin Hobbs and Wilson but opened his own practice. He died tragically only five years later in 1909. After Buchanan’s departure, Wilson carried on alone in the Townsville office, so that it was chiefly his work that enhanced the firm’s reputation in the first decade of the twentieth century. It is most fitting that the firm should still bear his name.
An energetic young man, Wilson played golf regularly and was one of the Trustees for the first golf club in Townsville, at North Ward. He also maintained an interest in military affairs in Townsville, joining the local volunteer defence force and was commissioned in the 15th Light Horse Regiment in 1904 when he once again served with Lieu-tenant-Colonel Harry Chauvel, under whom he was destined to serve in World War I.
During the succeeding years, though continuing with conveyancing and estate matters, Wilson handled a number of court cases reported in the press. As one might expect, the more sensational received the greatest attention, as in the case of Ruby Vickery who murdered John William Brooke at Bowen in 1905; Wilson instructed the barrister, A. W. MacNaughton, to plead insanity, a plea that was accepted. The Brownrigg divorce also attracted much interest with headlines of The actress and the doctor. Dr Brownrigg, a Charters Towers medical practitioner, had married the actress, Rosa Eddleston, at Clermont. Frederick Slater of the Evening Telegraph, Charters Towers, reporting salacious detail, was sued for libel; Hobbs, Wilson & Co appeared for the defendant.
Within three years, Lachlan Chisholm Wilson was destined to make history on a larger and more turbulent stage. As a major figure and pioneering influence, whose name is retained in the firm today, it seems appropriate here to detail Wilsons impressive but now largely forgotten military record.
By the time he left Townsville in 1912, Wilson was in command of the 6th Squadron of the 15th Australian Light Horse with the rank of Major. In Brisbane, he continued his military interests but in an infantry brigade, becoming second-in-command of the old Moreton Regiment.

At the outbreak of World War I, Wilson joined the Australian Imperial Force as a Major on 30 September, 1914. He was appointed second-in-command to Lieutenant-Colonel Hubert Harris of the 5th Light Horse Regiment. 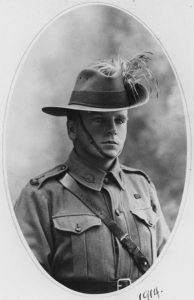 By April, however, the Brigade was again in action;  on 24th April, they entered the Jordan Valley to camp a mile north-west of Jericho. Winter was over andthe extreme heat affected both men and horses. The next objective was to capture Shunet Nimrin and Es Salt, where the enemy was entrenched. Wilson led the men of 3rd Brigade on a brilliant raid on Es Salt, taking the position with remarkable speed. The track up the hills to Es Salt proved to be impossible to wheeled traffic but horses and camels could ascend in single file. In the roughest terrain, the men were forced to dismount and lead the animals. Some stubborn resistance was encountered but the objective was gained and by 1st May 1918, Es Salt was in Australian hands. It has been referred to as “one of the cleanest and most decisive pieces of light horse work in the campaign”.

Wilson and his men swept onto Kefr Adan where 1800 Turks surrendered with 400 horses and mules. At Jenin, they closed the roads and seized two motor lorry convoys with fifty vehicles. On the outskirts of the town, twenty-three Australians captured 2800 Turks. Obviously the Turks were in great disarray. Before long, the Australians had captured 8000 enemy troops, a great dump of ammunition and a wagon loaded with gold and silver money.
In a fortnight they took over 11000 prisoners in what must be described as one of the epic advances of the desert campaigns of World War I.

This was part of the famous trans-Jordan campaign, described as:
” one of the most thrilling assaults in the history of the war, in which some twelve thousand mounted men, as well as infantry units, were engaged in a dash from the Jordan to the hills of Gilead”.
In September 1918, as the allied advance drove steadily north, Wilson was ordered to close the main road north of Damascus. He realised that if he skirted the city, still in enemy hands, he could not arrive in time to prevent many of the enemy escaping. Though it appeared to be strongly held, Wilson reasoned that the enemy was in a state of chaos. Taking what proved to be a wise, even inspired decision, at 0500 hours on 1 October, he ordered his men straight into the city. His assumptions proved correct. The greatest worry for the Australians was the delay caused by the civilian population welcoming them joyfully and by enemy troops wishing to surrender. Eventually they drove through Damascus, successfully cutting off the road to Homs. It was a daring exploit.
History has accorded Lawrence of Arabia the honour of being the first to enter Damascus but it was, in fact, Wilson of Australia and the men of the 3rd Light Horse Brigade.
“Col. Lawrence, of the Sherifian Army, with an escort pushed on to Damascus on the morning of the 1st October and were seen to enter the city a few minutes before 0800. By this time Wilson’s Brigade had come and gone”
For his part in the campaign, Wilson was awarded the D.S.O. and, on completion of operations in Palestine, he was made a Commander of the Bath in recognition of his services as Commander of 3rd Brigade.
When fighting ceased in November 1918, the Australians withdrew to Egypt to await transport home. For Wilson and his men, however, departure was delayed by the outbreak of rebellion in Egypt in March 1919. By that time, virtually all of the British and Indian troops, apart from the permanent garrisons in Palestine and the prisoner-of-war camps in Egypt, had left. The 1st Light Horse Brigade had embarked for Australia and arrangements were proceeding to repatriate the remaining four brigades. So, when the disturbances began, there were four Australian mounted brigades and part of the New Zealand Mounted Brigade in Egypt. Seven Australian regiments were detailed to Zagazig to assist in quelling the rebels, with Wilson as General Officer Commanding, he found the situation difficult:
“The villagers had been deceived as to the true position of affairs. They had been told that the Irish would not fire on them, that the Australians were fighting the English in Cairo, that at least 50 Australians were murdered every night in Zagazig and that there would soon be none of them left and, unfortunately for the villagers, they believed it, too.”

By June 1919, the rebellion was virtually over and, on 11th July 1919, the 3rd Light Horse Brigade left for Australia. The “originals”, like Wilson, had been away four and a half years from home and family. The account left by Wilson of their 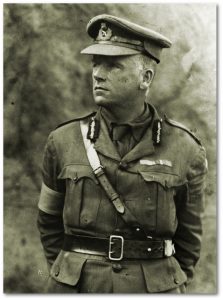 Egyptian adventures is one of the most detailed records of the Australian participation. He ended his wartime career with the decorations C.B., C.M.G., D.S.O., Croix de Guerre and was mentioned in dispatches on six occasions. Fittingly, he wrote the history of the 3rd Light Horse Brigade in the desert campaigns and, in 1926, with H. Wetherell, wrote the history of his first command – the 5th (Queensland) Light Horse Regiment.

After returning to Australia, Wilson resumed his career in partnership with E. K. Tully but continued his association with the Australian Military Forces. From 1923 to 1927, he was aide-de-camp to the Governor-General of Australia and he commanded 11th Infantry Brigade from 1925 to 1929. From 1941 to 1942, during World War II, he was State Commander of the Queensland Volunteer Defence Corps.
Wilson also participated in public affairs. He was Chairman of the Pensions Appeal Board; President of the Brisbane Legacy Club in 1929-30; Trustee of both the War Nurses Fund and the Limbless Soldiers Fund; and for a time President of the equivalent of the South-Eastern District Branch of the RSSAILA (now RSL). In business affairs, he was a director of the AMP Society; as Deputy Chairman of the Queensland Board, he returned to Townsville to open their new District Office building on 21 February 1938. This building superseded the original AMP building in east Flinders Street, in which Hobbs and Havard rented offices from 1898 to 1901. Wilson was also Chairman of Directors of Cribb & Foote and Alexanders Pty Ltd and served as Chairman of the Air Inquiry Committee that investigated the tragic loss of the aircraft “Kookaburra”
Wilson died on 7 April 1947. Despite his successes, he is remembered as a quiet and modest man, truly “the least known distinguished man in Queensland”