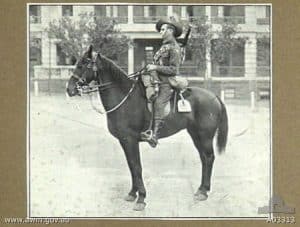 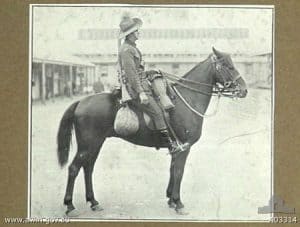 The saddle blanket is about 5’9″ (1752mm) long by 4’10″(1473mm) wide. The method folding usually adopted is to make 2 folds giving 4 thicknesses of blanket. The length of the blanket is folded first then the width giving 2 folded edges and 2 raw edges. The blanket folded measures about 2’10” (864mm) by 2’5″ (737mm). The thick folded edge is placed in front of the folded edges on the off side and the raw edges on the near side and rear of the saddle. The longest side of the blanket goes across the horse.
An extra blanket was issued on operations and both blankets were used as a saddlecloth.

Initially only officers were issued with saddle wallets, however they became general issue towards the end of WW1, and their use continued after WW1. (Not used for ceremonial parades)

Contains 2 shoes one front and one rear and a quantity of nails. Connected to the near side of the saddle.

The sway strap is connected to the surcingle.

The attaching strap is fed under the rear arch and over then back to the buckle.

The sword and scabbard fit through the frog on the outside of the shoe case and is secured by the retaining strap.

Military re-enactors tend to debate at length the detail of the neck rope and neck chains. Neck chains (see below) are popular with some groups’ for ceremonial parades. Draught horses had neck chains, also some remount troops, with their use recorded during WW1 as the horses were eating the hemp rope. The standard Household Cavalry neck chain is finer and longer than the standard military neck chain. However there is very little evidence to support the authorized use of neck chains, although some Commanding Officers may have included variations in Unit Standing Orders.

Head Rope – Should be fastened on the lower ring of the jowl piece, or when bridles are without a jowl, the ring provided. Passed around the near side of the neck, and fastened on to the standing part of the rope with a coil of turns of which the top end should be 6″ (152mm) – 8″ (203mm) from the horses’ jowl. This should be worn fairly tight and not hanging loosely about the shoulder.

Head / Neck rope recommended for the ALHA
Hemp rope 10′ (3m) long, .5″ (12.7mm) diameter with 1.5″ (38.10mm) ring on end. The knot is four complete turns and two half turns and the tail should point towards the ground. The knot is spaced one hand span approximately 230mm from the bottom ring of the jowl piece.

Ceremonial the same as above however white cotton rope 11mm diameter.
* Circumference

Ensure you are aware of the gun laws pertaining to your State.RIFLE

BAYONET1907 Pattern worn on the left side with the attachment ring to the rear.

The scabbard should be khaki.

The sword fits into the sword frog on the horse shoe case.