In 1899, Colonel Legge, the Commander of the Tasmanian Colonial Military Forces requested that the Tasmanian Government should raise a Reconnaissance Regiment to support two Tasmanian Ranger Infantry Units.

The Tasmanian Governemtn granted the request and Colonel Legge selected the district of Ulverstone to form the mounted unit. This district was selected because Colonel Legge noted that the farmers were prosperous and there were many fine young men in the area dn the horses were of a high standard. 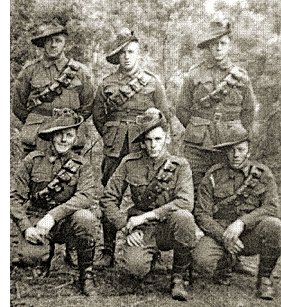 Training started in the second half of 1899, with young men from Ulverstone and Penguin forming the first company under the command of Captain G. T. Stewart.

Many of these young men saw service in the Boer War as the Tasmanian Imperial Bushmen.

Two of its members, Lt Wylly and Trooper Bisdee were awarded the Victoria Cross from bravery under fire. They were the first Colonial born Australians to receive the V.C.

In 1901, all Australian Colonial Forces came under the control of the Federal Government and as a result of that the Tasmanian Mounted Infantry was re-designated the 12th Australian Light Horse Regiment (12 LHR).

After the Boer war the Regiment expanded by forming troops throughout the North West, North East and the Central Midlands of Tasmania.

With the advent of World War One the 12 LHR was renamed the 26th Australian Light Horse Regiment (26 LHR). This unit provided officers, men and equipment to form a Tasmanian Squadron for service in World War One.

“C” Squadron was posted to the 3rd Australian Light Horse Regiment (3LHR) that was being raised in South Australia. This first AIF unit served for seven months at Gallipoli before joining the Australian Mounted Division in Palestine where they served with honour until 1918.

The 3rd Australian Light Horse Regiment, including the Tasmanian “C” Squadron cleared and held the hills to the right of the line during the last great cavalry charge at Beersheba.

After the First World War, the Tasmanian Mounted Infantry continued to expand with a number of Officers and NCO’s from “C” Squadron conitinuing to serve, these men passed on their skills to the younger members of the Regiment.
There were two more name changes, the Tasmanian Mounted Infantry were first designated the 3rd Australian Light Horse Regiment (3LHR) in honour of the AIF unit.

In 1931 the Regiment was finally designated the 22nd Australian Light Horse Regiment (22LHR).

In 1932 the 22nd Light Horse Regiment was presented with its Guidon bearing the Battle Honours from the Boer War and the First World War won by Tasmanian Horsemen.

The Guidon can be seen in St David’s Cathedral, Hobart, Tasmania.

At the outbreak of World War Two, the unit was once again able to provide trained officers and men.

In the meantime, the 22nd LHR continued training recruits and provided active patrols covering the Southern approaches to Tasmania.

In 1942, horses were withdrawn and the unit, now named the 22nd Motor Regiment, was issued with Bren Gun carriers and Blitz Buggy Trucks.

Extensive training soon brought the Regiment to a high state of readiness in preparation for the likely invasion of Northern Australia. In 1943, when the fear of invasion had passed, the unit, now based in Victoria, was suddenly disbanded, with its officers and men being posted as reinforcements to A.I.F. units right throughout the South West Pacific war zone where they continued to serve until the end of the war.

They carried with them the highest traditions of the Tasmanian Mounted Infantry.

In 1980, an enthusiastic group of ex-Lighthorsemen formed an Association called the 22nd Light Horse and Motor Regiment’s Association. They meet annually for a luncheon which is held at Ulverstone, the birthplace of the 22nd Australian Light Horse Regiment.

As a memorial to the Regiment, a mural of Lighthorsemen and Bren Gun Carriers can be seen near the main cenotaph at Ulverstone.

A mounted Light Horse Section has been established in Hobart. They wear the uniform and badges of the 22nd Light Horse Regiment and parade on ANZAC Day and other ceremonial occasions.