The raising of this famous Australian Regiment was due to the vision and untiring efforts of the enthusiastic Lieutenant Colonel Kenneth Mackay who, as a Captain, obtained permission from the New South Wales Government to travel the country districts with a view of enlisting the best horsemen in the Colony into his Regiment, the 1st Australian Horse. The first enrolments took place at Murrumburrah on 28 August 1897 and by 20th November, recruiting throughout the country districts was completed with 3,000 eager applicants ready and willing to join the Regiment. Detachments were formed at Murrumburrah, Gunnedah, Gundagai, Quirinidi, Mudgee, Scone, Michelago, Boggabri, Cootamundra, Braidwood, Lue, Wallendbeen and Bungendore.

In order to keep the widely scattered detachments at equal strength, only 400 men were selected and a capitation allowance of five pounds was granted by the Government to cover preliminary expenses. Captain Mackay was gazetted Commanding Officer and raised to the rank of Major, and a few months later promoted to the rank of Lieutenant Colonel. He was fortunate to have as his second in command Captain A. F. H. Ferguson, formerly of the 2nd Life Guards, who, with a few N.C.O.s of previous military experience set about training the new recruits in the fundamentals of cavalry drill. They were soon joined by Lieutenant R. R. Thompson, an authorised drill instructor, who contributed much to smartening up the eager recruits. They were eager indeed, for many a part-time Trooper would have to ride forty or so miles to attend a five hour drill, then ride forty or so miles home again, on the same horse.

The first challenge of the Regiment’s efficiency arose at the Easter camp of 1898 at Milkman’s Hill, when news was received that Major General G. A. French, who had previous service in command of Canada’s North West Mounted Police, Commandant of the New South Wales Defence Force, was to inspect the regiment. Fortunately the long awaited uniforms and necessary equipment and swords arrived the day before inspection and the 1st Australian Horse paraded four Squadrons and a mounted band. Although they had never drilled together before, they passed muster well, thanks to the efforts of Captain Ferguson and Lieutenant Thompson, who put the Regiment through their paces just a half hour prior to the inspection. An Imperial British officer spoke of the Junior Regiment of Cavalry as grand fellows, fine riders, and hard as nails – the horses are unsurpassed for the endurance and staying power.

The 1st Australian Horse proved a spectacular sight in their myrtle green uniforms. All buttons and badges were generally black, but were later changed to brass. 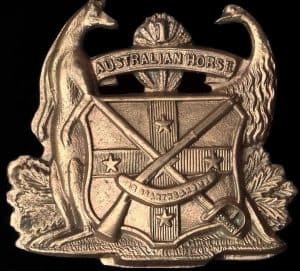 The brass badge featured a kangaroo and emu supporting a shield emblazoned with the cross of St George and five stars of the Southern Cross, with a carbine and sword crossed in front. These were secured by a boomerang with the motto “For hearths and homes”. A scroll with the words “Australian Horse” adorned the top of the shield and was supported by the shoulders of the kangaroo and emu. The myrtle green slouch hat was turned up at the left hand side and featured the regimental badge. It was ornamented by a black puggaree and black cock’s plume. Officers wore dress and undress tunics of myrtle green, the dress tunic being similar to that of the Rifle Regiments, with black mohair braid around the collar, tunic front and the seams at the back, the cuffs featuring black corded Austrian knots, while the front of the tunic was decorated with frogging, terminating in black net caps, and fastening with black olivettes. Breeches were myrtle green with double black stripes along the outside seams. The black leather shoulder belt and pouch featured the Regimental badge, surrounded by a wreath of Waratahs. The black leather sabretache also featured the Regimental badge. Black leather gloves and black hussar pattern riding boots and spurs completed the uniform. Other ranks wore the undress jacket similar to officers undress, which was single breasted, myrtle green with black facing. Breeches were to match and were worn with black ankle boots and puttees. Hats the same for officers. The shoulder belt was of plain black leather with pouch, featuring the Regimental badge.

.By 1898, the strength of the Regiment was increased to 628 men and because of their green appearance on parade, they became known by the nickname “The Irish Guards” or the “Undertakers”. While still a Volunteer Regiment, in addition to supplying officers and men to the various Bushmen’s Contingents to the Boer War, two detachments of the Regiment under Colonel Mackay served as Australian Horse in the cavalry division under General Sir John French during the South African campaign. They fought and rode hard, suffering many casualties in men and horses, during the forty-five engagements of the campaign, which included Pretoria, Belfast, Driefontein, Diamond Hill, Paardeberg, Johannesburg and Kimberly. Their last action was at Heidelburg, before returning home.

The Regiment was raised from a Volunteer Force to the partially Sergeant paid system in 1900. The historic Federation year of 1901 was a busy one for the 1st Australian Horse, they being required to parade and take part in reviews and private escorts to many visiting State Governors and celebrities. They took part in the inauguration of the Federal Paliament in Melbourne in May 1901 and on the 28th of that month, they whole Regiment paraded past Their Royal Highnesses the Duke and Duchess of Cornwall and York in Centennial Park, Sydney, and provided many escorts for the Royal personages in the days that followed.

Now part of the Commonwealth Military Forces, on 1 December, 1903, the Regimental title and structure was changed. It became the 3rd Australian Light Horse (Australian Horse). A Squadron of the New South Wales Mounted Rifles from Bega was attached to the 3rd Australian Light Horse to bring it up to strength. Colonel Mackay, C.B., remained in command of the Regiment and the Governor, Lord Beauchamp, was appointed Honorary Colonel of both the 3rd and 6th Light Horse Regiments. Permission was obtained to retain the myrtle green uniforms and, like the New South Wales Lancers and the New South Wales Mounted Rifles, they managed to evade the introduction of the new universal khaki uniform for quite a time.

On 14 November 1904, the Regiment received the Kings Standard and Colonel Mackay, after giving seven years of tremendous service to the Regiment he created, retired. In May 1908, the honour South Africa 1899-1900 was added for services rendered during the Boer War campaign, and a Pom-pom and Machine Gun Section was formed within the Regiment. When a Trooper defied regulations and polished the black enamel from his brass buttons and badges to smarten up his appearance, his initiative so impressed the Commanding Officer and his Adjutant that an order was issued on 22 December 1908 for all ranks to follow suit. However, their glory was shortlived as, with a reorganisation of the Military forces, the Regiment’s title was changed to the 11th Light Horse (Australian Horse) and the wearing of the old myrtle green uniform was discontinued and replaced by the new universal pattern.