BEERSHEBA… THE CONTROVERSIAL PHOTOGRAPH OF THE CHARGE

For nearly sixty years, the authenticity of this photograph has been hotly debated.
It was claimed to show the light horse charge at Beersheba on 31 October 1917. But the photographer was unidentified, the original negative could not be located and the viewpoint of the charge seemed unlikely. How does a photographer come to be in no man’s land in the path of an actual cavalry charge?
The official view of the Australian War Memorial has been that it was actually taken during a re-enactment of the charge staged for an official cameraman at Belah on the coast of Palestine some five months later – despite the fact that no matching movie film or photograph has ever been produced…

See also…
Beersheba, a genuine photograph of the charge?
Photographs of Australian Light Horse going into action at Beersheba. 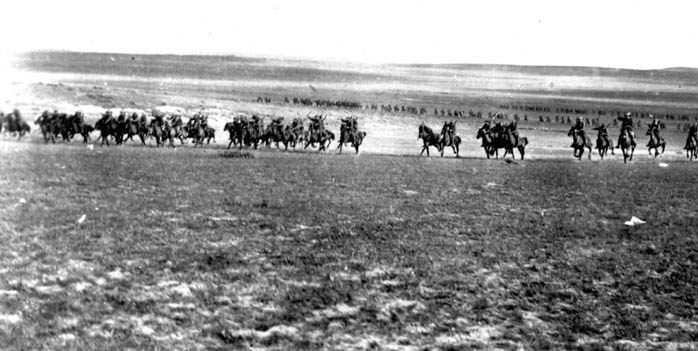 Click on the below enlarged sections of the photograph.

The photograph first appeared as a copied snapshot passed around among light horsemen on the Palestine front in 1918. By December 1920, when an exhibition of war photographs toured Australia under the direction of Donovan Joynt, VC, the Beersheba picture was “a notable exhibit”. Joynt recorded that the photograph was “under constant discussion” and the theory that it actually showed the Belah re-staging had already been advanced. However, this notion was effectively squashed when Brigadier General Grant (who had directed the charge) and members of his staff examined the photo and pronounced that while the landscape in it tallied with that at Beersheba, it did not match the terrain at Belah. Grant also said that the charge was shown in correct formation, finally declaring, “I cannot and will not take exception to the claim made in the Exhibition catalogue that it is a photograph of the actual charge”.
It was apparently also during this tour that someone proposed the idea that the photograph had been taken by a Turk and found in his camera when he was captured. The absurdity of the theory clouded official attitudes to the photograph for the next sixty years and encouraged the Memorial’s acceptance of the “Belah re-enactment” theory. Forty seven years after his first encounter with the photograph, Donovan Joynt sought a print from the Memorial for publication in R. J. Hall’s “he Australian Light Horse”. The then Director, Mr W. R. Lancaster, wrote to Lieutenant Colonel Joynt on 29 May 1967, summarizing the Memorial’s reasons for treating the photograph as not genuine.
1. The formation in which the charge was made was different from that shown in the photograph.
2. At Beersheba the ground was quite bare and the galloping horsemen quickly became enveloped in large clouds of dust. In the photograph the ground appears to be fairly well covered with herbage and there is practically no dust.
3. At Beersheba, the Light Horsemen charged in a westerly direction in the late afternoon so that the shadows would fall behind the horses.
4. The final stretch of the Beersheba gallop was downhill whereas the horsemen in the picture are galloping uphill.
5. There is also the improbability generally of such a photograph having been taken.
Undeterred, Joynt contacted the 4th Light Horse Association to see if veterans of the Palestine campaign could help his research. They could and did. The Assistant Secretary of the Association, E.G. (Rex) Elliott, was introduced as the man who had taken the photograph. Elliott, who completely convinced Joynt that his claim was genuine, wrote a statement which was published in an edited form in “The Australian Light Horse”. This is the complete text of his account.