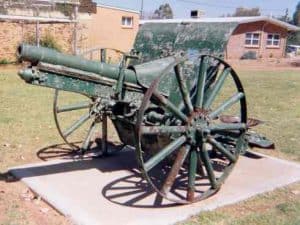 The picture shows a 75mm Turkish gun that stands in the memorial park on Wills St in Charleville. This gun, number 452, is one of the many war trophies allotted to Australia after World War One (WWI). The story of its capture is both interesting and unique. Following is an account taken from the official history of the A.I.F. in Sinai and Palestine, and the unit histories of the 5th and 7th Light Horse Regiments..

Following the breakthrough on the coast, three mounted divisions were galloping up the Plain of Sharon on the 19th of September 1918. By the 22nd of September the Turkish 4th Army that was opposing the General Chaytor’s force, including the ANZAC Mounted Division, was forced to retire or be cut off. As a result the ANZAC Mounted division was required to cross the Jordan River for the third time to advance on Amman and cut off Turkish garrisons in Maan and Arabia.

After successfully establishing bridgeheads and clearing the rearguard from the foothills, Chaytor’s force was on the march to Gilead. By 7pm on the 23rd the New Zealanders had captured Es Salt. At 6am on the 25th of September, the New Zealanders and Ryrie’s 2nd brigade moved on Amman with Cox’s 1st brigade in close support. The ANZACS were keen to even the score following their fighting at Amman earlier in the year. They probed forward with good work being done by the 5th Light Horse Regiment (LHR) in capturing two redoubts. After an attempt by the Cantebury Mounted Rifles to gallop the Turkish defences, the advance slowed. The 1st LHR had been cooperating with the New Zealanders on the left and were improving their ground. The 3rd LHR was also put in on the left and the assault became general.

In Gullett’s official history it is stated that, a daring reconnaissance by Lt. Stanley of the 7th LHR revealed some dead ground within eighty yards of the Turks main line of defence. Stanley, with Captain Williams led a small force of thirty five and took the Turks by surprise capturing nine officers, 97 other ranks and seven machine guns. According to Gullett, this was the decisive incident of the assault as it smashed opposition to the 7th and eased resistance to the 5th LHR. As a result, “C” Squadron of the5th LHR was able to enter the town at 1.30pm and Colonel Cameron declared it clear of the enemy at 3.20pm in a message to Brigade.

Following the capture of Amman, “B” Squadron less one troop, of the 7th LHR proceeded to the Leban Station according to Regiment’s history, to observe the Turk’s movements. A wounded Turk found at Leban, reported that the enemy was in strength at Ziza, part of the force moving up from Maan that was between 5,000 and 6,000 in number.

According to Colonel Cameron’s report the 5th LHR less one squadron moved out at 5am on the 28th of September. The advanced troops halted some 700 yards from the Turkish positions at Ziza. The Turkish commandant advised that whilst he wished to surrender to the Australians, he considered that they did not have sufficient numbers to protect his force from the 10,000 Bedouin and Arab tribesmen that surrounded Ziza.

Because the Main force had previously been spotted from the air as it moved to Ziza, arrangements had been made to bomb the Turks that evening. Cameron was keen to prevent this happening. As his signallers had by now repaired the telegraph wires, Cameron was able to discuss the situation with Chaytor’s chief staff officer, Colonel Browne.

As a result, Ryrie was ordered to join Cameron with all available troops. However, Browne had difficulty in contacting the airmen’s headquarters. In a further effort to prevent the Turks being bombed, Cameron sent Lt. Crawford to place the Regimental Report Centre Sign and White Strips in the rear of the Turkish trenches. It wasn’t necessary as the raid had been successfully cancelled.

Meanwhile, Ryrie, who only had the 7th LHR available was quickly on the move. Ten miles had been covered at the trot and canter when a further message was received from Cameron that the situation was critical. The pack horses were left behind and the remaining five miles were covered at the gallop reaching the 5th just in time before dark.

Richardson wrote in the 7th Regiment’s history, “The 5th Regiment was concentrated, waiting reinforcements while the Turks in their trenches were standing to arms holding off the Arabs with shell and machine-gun fire. The vulture appearance of the Arabs, who had spoilt our operations at an earlier date and who were now willing that the British should do the fighting and they the looting, will note be readily forgotten.”

On his arrival, the Arab chiefs crowded around Ryrie and urged him to attack the Turks whilst promising to support the Australians. But Ryrie had experienced their failure to keep their word previously. He too was concerned about the fate of the Turks if they surrendered their arms as his force was still too small to provide protection. So he took the unusual step of joining forces with the Turks for the night to await reinforcements in the morning.

Having advised the Turks of his intentions, he then ordered two sheikhs to accompany him. He then led his two regiments through the Arabs into the middle of the Turkish position. There he told the Turks to retain their arms and hold their trenches against the tribesmen and that the light horsemen would stand by in support. He then told the two sheikhs that if their men attacked during the night, they themselves would be immediately shot. They quickly sent out messengers to inform their followers.

During the night, the Australians and the Turks exchanged their food, made chappaties and boiled their quarts on the same fires, after years of fighting each other. Throughout the night, the Turks still fearful of being slaughtered by the Arabs stood to arms and fired bursts from their machine guns and rifles to which the Australians shouted encouragement. Richardson states that “C” Squadron of the 7th LHR had to use the Hotchkiss rifles several times to prevent the Arabs breaking through.

In the morning the New Zealand Brigade arrived and took over the protection of Ziza while the 5th LHR less one squadron and “C” Squadron of the 7th LHR were detailed to take the prisoners to Amman. A few hundred Turks were allowed to retain their arms as additional protection until they reached Amman. Approximately 5,000 Turks were captured at Ziza.

The number of guns captured at Ziza varies between the various accounts. Gullet has it at thirteen, Capt. Wetherell recorded 18 in the 5th Regiment’s unit history and Colonel Richardson shows 17 guns amongst large quantities of other materiel. Whatever the number, this truly was a remarkable incident.

Other guns listed as captured at Ziza by the 5th LHR were given to Bundaberg, Cairns, Dalby, Hughenden, Laidley, Maryborough, Pittsworth and Roma.