…not commonly known are the contributions the Australians made to the conduct of war…
There exist no examples of the British cavalry doing the same, although their doctrine provided for such actions…

…One of these contributions was the temporary restoration of tactical mobility as a technique to the battlefield. However, they were not responsible for the propagation of the incorrect lessons, although they may have fallen victim to the same lessons. Such lessons include the dependence upon the horse for continued tactical mobility on the modern battlefield using a very specific and limited experience in the Middle East. What is significant about their participation in the Middle East is their particular approach to war.

The Australian approach to war was a result of their particular geographic and cultural conditions. At the turn of the century, the Australians were imbued with values now attributed to the typical Australian. The effects of the Australian pastoralist on their society were important in developing pioneering traits. Even those Australians who were not from the outback enshrined these values so that it became an accepted ideal of all Australians.

While a large number of the Australians were not from the outback, they all shared an affiliation with their Walers. Perhaps it was a sign of the times, but the horse was important to the Australians who used them as livelihood in the outback and for transportation. The familiarity of the Australians with their horses became an attribute during the conflicts in which they participated, both in South Africa and in the Middle East. This familiarization with horses reflected a general set of rural values that Australians developed as part of their cultural traits. 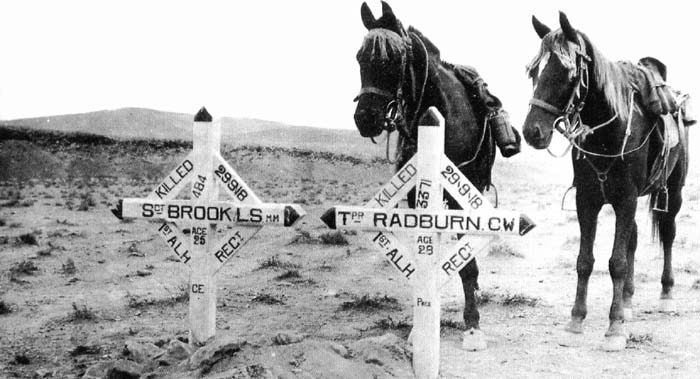 Graves of two men who were among the last of the 1st Light Horse Regiment killed in the Middle East campaign. Even in death the regiment regarded the soldier and his horse as a team.

While discipline in the British Army was manifested in a number of forms to include saluting and dress, the Australians rejected these formalities and considered traits such as loyalty to their “mates” and deeds as the true demonstrations of discipline. This difference was not always understood by their British cousins with whom they worked in the Middle East and Europe and was a source of friction between them.
The conduct of the war in the Middle East quite clearly demonstrates examples of how the Australian traits were practiced successfully. The campaign in Egypt and Palestine forms an interesting example since both the British and Australian mounted forces fought against the same enemy there. Both faced very similar conditions, such as the terrain, weather and the general situation. The British demonstrated that they could not exercise the same initiative and flexibility as the Australians when all other factors were alike. On the contrary, while it was not the intent of this study to prove such, the British clearly demonstrated inflexibility. 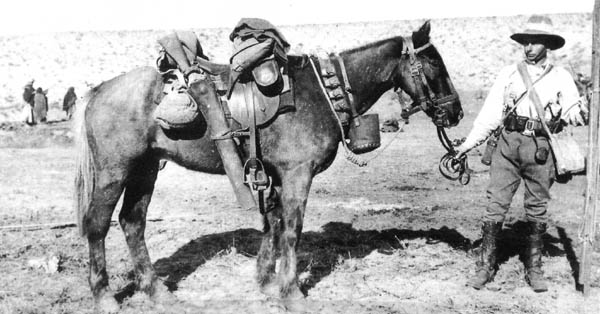 Corporal Austin Edwards, his horse Taffy, and all equipment.Corporal Edwards was seriously wounded at the Battle of Romani. During the battle, Taffy stood still for his wounded rider to remount and escape.

It is interesting to note that in World War One, both the British and Australian mounted units in the Middle East fought the same enemy under the same circumstances. What makes this comparison valid are the common factors of the terrain, situation and enemy. While these factors were key, they were not the cause of the successes for the Australians. For example, the terrain contributed to the tactical success of the Australians but it could have done as well for the British. It happens that the Australians were able to take advantage of the situation.