Howard Chambers “I was cutting cane today when I received a letter advising me to report for medical examination. I felt rather excited about it but kept it to myself. About 30 turned up at the Orderly room and six of us were selected. The rest looked rather disappointed.”

Former Homebush resident, Howard Chambers’ first entry in a lifetime of diary writing in early December 1914 recorded the excitement of being accepted for the Australian Light Horse Expeditionary Force. After a trip to Charters Towers to farewell a brother, he travelled by coastal steamer from Townsville to Brisbane to join the 2nd Light Horse Regiment and army life at Enoggera. 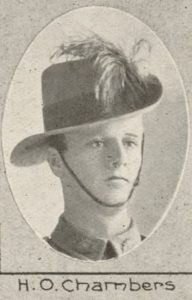 It is said that 600 of them were killed. The 25th April 1915 will never be forgotten by Australia. Over 2600 of the reinforcements for the Infantry left last night for the front. The Turks I think are in for a hot time now.”

The real battle had been joined and the last few entries in the little notebook diary record the hurried preparations for the departure of the urgently required reinforcements, which included his brother: “Hear some wild yarns about our regiment going to Dardanelles shortly. The yarn is too true. Arthur called in at our tent this evening and told us all about it. The men have been preparing for their departure which is to be in a few days time – about Sunday (9th). They have been sharpening their bayonets and a lot of other jobs.
The losses have been heavy at the Dardanelles and the LH is going to hold some of the places taken by our infantry. We have to look after the horses which are going to be left here. They hope to send them along later. There is great excitement – the men are pleased to be able to do something at last. I am going to look after Arthur’s horses”.
In fact Howard was to follow his brother to Gallipoli within two months. By then, the Regiment had suffered severely in battles at Quinn’s and Pope’s Posts as well as the daily attrition by snipers and “cricket-ball” bombs. General health was poor because of inadequate sanitation, unburied dead and the totally unsuitable rations in the very hot climate.
Colonel Bourne, who compiled ‘The History of the 2nd Light Horse Regiment, 1914-1919’ wrote that by July even though “the medical officers had had orders to evacuate no man who could hold a rifle – the Regiment was so weak numerically that we had one Squadron 3rd Regiment attached.”
Just as one brother arrived in reinforcements the other succumbed to gastroenteritis, was evacuated to Hospital and did not return until September.
In August, the Anzacs were used to create diversionary “demonstrations” during the debacle of the Suvla Bay operation. The 2nd Light Horse Regiment had 16 killed and 36 wounded in a suicidal attempt to capture the enemy position at Quinn’s. Chambers remembered that dreadful day in a later diary. He also remembered his departure.
‘The 25th April 1915 will never be forgotten by Australia …” from Gallipoli during the now famous evacuation: “Twelve months today since leaving Peninsula” (18th Dec) “and This time last year was clear of the Peninsula” (19th Dec).
The Regiment sailed for Alexandria on December 19 and the brothers spent Christmas Day at sea. Once back in Egypt the regiment re-grouped in the Mounted Force which fought the Turkish army in the Sinai Desert, Palestine and Jordan. The desert terrain and environment were exhausting for both men and horses, water was at a premium and of poor quality. It became an essential element in the strategic planning and on one occasion Chambers’ diary tells of a reconnaissance party infiltrating at night well behind the enemy lines to prospect for water.

“Left at 6 pm with party of 34 for Wadi el Arish. A dangerous job. First party into Wadi el Arish. Arrived at Wadi el Arish at 4 am. Left at 5.30 am. Arrived back at Gerrat at 3.30 pm. Distance about 30 miles to Wadi el Arish.”
They took a heliograph and a basket of carrier pigeons with them in case they needed to communicate!
The enemy began to use aeroplanes and bombed the Brigade camp at Romani. The 2nd Light Horse Regiment was not badly hit but many of the Brigade horses stampeded and galloped to death in the desert. In some battles the soldiers had no rations for a day and the horses no water for more than two days. There was always concern for their horses. Before the Battle of Magdhaba, Chambers wrote: “Arrived at a hill on the coast to the East of El Arich at 8am today. 3 pm and our horses hadn’t had any water since yesterday before we started at Gerrat, but some have just gone away to water.”

They won that battle and returned to camp for Christmas (1916) with 1100 prisoners. A Scottish Division which then became responsible for rationing the prisoners was not amused by having to share their rations. Chambers says they spent Christmas Day: “Having a rest in camp and washing. The usual work of fixing up again – Xmas pudding for lunch.”

Another victory at Rafa convinced the Turks that the Mounted Troops were a formidable foe and they withdrew to the more difficult Gaza-Beersheba defence line. It was near Khan Unis during the second battle for Gaza that Arthur Chambers was killed.

“Went out on extreme left of our front to connect with New Zealanders. Met with heavy rifle and machine gun fire and it was here that Arthur was mortally wounded, but I did not know it was such a wound at the time and heard good results from him. Friday 20th April – The worst day I ever spent in my life. Arthur died between 1 and 2 this morning. We buried him at 10 am. The Brigade had to move out and we were given permission to bury poor old Arthur. About this time Taubes bombed the Brigade and inflicted about 100 casualties. We have had an awful time lately no sleep, no rest, very little to eat and have had a good number of casualties.”

Among Arthur’s belongings which were sent home was a silver cup which had been won in an “Arab Pony” race at Assuit a year before. The “pony” was Arthur’s horse Teddy which is believed to have been of racing stock and bred on a property bear Warwick. Teddy served later with the regiment at Beersheba.
The Regiment improved their trench lines and maintained patrols around the Shellal area and there were several diary entries about attention to his brother’s grave.
The splendid 5th Century Shellal mosaic, which is now displayed in the War Memorial in Canberra, was found there and professionally protected and recovered after the battle of Gaza. He was so impressed by the good agricultural land there that he eventually names his home at Netherdale “Shellal”.
Despite the personal trauma, he was still in the front line and involved in such dangerous stunts as the demolition of the old Turkish railway line running to Beersheba. “Under cover of darkness we arrived at the railway at 7.30 am, blew up a great length of enemy line – 30 miles away SE. Arrived back in Camp Shellal at 11.30 pm, 6000 lbs gun cotton used.”
He then returned to a training school near Cairo as a musketry instructor and from his diary it seemed as if the less stressful life behind the lines was helping to heal body and soul.
However, tragedy struck again at the end of July 1917. In the previous December Arthur had received a family letter saying that two other brothers had sailed for France at the end of November. The diary has only five inconsequential entries between August and the end of November after writing: “Received cable last night with the sad news about poor old Tooey.” The much loved youngest brother Stuart, had been killed at only 20.
The New Year (1918) found him on secondment, in command of the training squadron near Cairo.
Meanwhile the Regiment had been heavily involved in the action which secured Beersheba and Gaza in early November. Jerusalem fell in December and the Regiment spent Christmas near all these ancient cities known in Biblical times before continuing the attack into the Jordan Valley.
In May he rejoined the Regiment near Bethlehem where he contracted the malaria which was to trouble him for the rest of his life. So many of the force were having to be evacuated with malaria that at one stage the Regiment had only one man for each three horses!
During the next stint of duty in the Jordan Valley, they repulsed an attack on Musallabah – a pivotal position for the entire force in the Valley.
“To Musallabah. Came out last night about midnight. Slight shelling by the enemy onto our position this morning. Visit by Generals Chauvel and Howard Vyse. Enemy putting up a great show with artillery. Enemy attack with German and Turkish troops. King and seven of troop killed. All quiet again. Gave us great dust up with artillery. Saw General Chauvel again. Capt Handy, Sgt Chambers (no relation) and Gisart killed. We are being relieved tonight by the 8th. Got away from Mussalabah at about midnight.”
He was not to participate in the front line again because of illness and being evacuated to hospital in Gaza and Port Said. By the time he recovers the diary is recording: “News of Bulgaria’s collapse – unconditional surrender, Turkey capitulates and Austria capitulating.”
His weariness of these dreadful years is clear when he writes: “News of the war still exciting, but very little excitement is shown by the soldiers. They have been looking for it for so long.
Finally, German delegates have arrived at GHQ in France. They have been given 72 hours to decide. 1100 Monday, time will be up. What is it going to be?”
And on the 11th November 1918: “Word has just come – Germany has agreed to no terms”. Life changed. He wrote of Christmas: “Turned out a beautiful day, we had a bonza Xmas dinner, the best so far.”
At last, despite a bout of malaria, he joined a ship from England bound for Australia. Amongst the 1400 on board he noted some well known people: C.E.W. Bean (reporter), A B Patterson (Banjo), C G Macartne (cricketer).
They arrived in Brisbane on May 12, 1919 and he was met by his parents and sisters and in the next few months travelled to Warwick, North Queensland and Sydney to visit his brothers. What bitter-sweet reunions they must have been, in the knowledge that two brothers were not to return.
He served again in the Garrison Battalion, in New Guinea during World War II.
Throughout his later life he was much to many people as husband, father, grandfather, uncle and friend. Although his surviving son and daughter no longer live in the Mackay district, grandchildren and their families still remain. Many folk who grew up in the 50’s and 60’s in the Juliet and Kippen Streets area of Mackay will remember him as the old man who led the regular swimming parts to Far Beach.

Excerpts from the diary of Howard Chambers
Compiled by his daughter, Lyn Plumb
As Published in The Daily Mercury

The Chambers Brothers – Their story