The 2/14th Queensland Infantry was formed when volunteers were called by proclamation on 18th February 1860 by the first Governor of Queensland, Sir George Ferguson Bowen. In 1864 the unit was renamed Queensland Light Horse. Under the ‘Defence Act of 1884’ there was a reorganisation and the unit name changed in 1885 to Moreton Mounted Infantry.

In 1891 during the Shearers Strike, a State of Emergency was declared and many units were called out for active duty to help maintain order. One of these units was the Moreton Mounted Infantry. The troops were placed on full time duty for five months and served in the Barcaldine, Clermont, Longreach and Charleville districts. One of the Mounted Infantry officers who served at this time was Captain Harry George Chauvel – later to become General Sir Harry Chauvel.

Following the Shearers Strike the Mounted Infantry units adopted the emu feather plumes to wear in their felt hats. It was also at this time that the emu was incorporated in the units badge.

On the 10th July 1899 the Premier of Queensland, the Honourable J.R. Dickson, offered troops to help Great Britain against the Boers in South Africa. This was the first offer of assistance made by any of the Australian Colonies. It was accepted and one company of Mounted Infantry was detailed for duty. Although the Queensland contingent was not the first to see action, they were the first to suffer casualties. Private V.S. Jones and Private D.C. McLeod, killed in an engagement at Sunnyside, were the first Australians ever to be killed in action.

In the period following the Boer War the State forces were amalgamated to form the Commonwealth Military Forces. In the changes the four battalions of the QMI were reformed as the 13th, 14th and 15th Australian Light Horse Regiments (Queensland Mounted Infantry).

King Edward VII awarded a King’s Banner to each unit which served in the South African War and in 1904 each of the three Regiments of the QMI was represented in Melbourne where the banners were presented by the Governor-General. In 1908 each regiment was further awarded the Battle Honour “SOUTH AFRICA 1899-1900-1-2”.

With the introduction of compulsory military service the army was expanded and in 1912 the designation of the units of the QMI were again changed to 1st, 2nd, 3rd and 27th Light Horse Regiments (QMI). During World War 1 these units continued to serve at home and in 1914 a volunteer expeditionary force, the Australian Imperial Force, was formed. The 2nd ALH served at Anzac on the Gallipoli Peninsula where it distinguished itself at Quinn’s Post, Sari Bair and Suvla and later served in Egypt, Palestine and Syria.
Some of the actions in which the Regiment took part included Romani, Charge of Magdhaba, Rafa, Gaza, Beersheba, Jerusalem, Megiddo and Jordan.

In July 1918 the 1st ANZAC Battalion of the Imperial Camel Corps, which had fount with the Desert Mounted Corps, became the 14th  Australian Light Horse Regiment. They took part in the final offensive which overthrew the Turkish right flank in Palestine.

In 1948, CMF units were again raised but with no armoured unit allocated to Queensland. On 20th July 1949, A Squadron 2nd/14th QMI was raised as an armoured car squadron. Eighteen months later the unit was increased to regimental strength and was equipped with Staghound Armoured Cars, Canadian Scout Cars and White APC’s. On 6th August 1950 at Kelvin Grove Barracks, a mounted party of pre-war members handed over the guidons to the 2nd and 14th Light Horse Regiments to the unit. 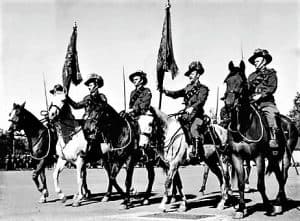 In 1956 the role changed to anti-tank. Initially the unit was equipped with 6 pounder and 17 pounder guns but these were soon replaced, firstly by 120mm (BAT) anti-tank guns and finally by 106mm Recoilless Rifles. In 1960 the reorganisation of the Army resulted in the closure of the QMI country depots.

During 1966 2nd/14th QMI was once again designated a Cavalry Regiment and re-equipped with Staghound Armoured Cars, Ferret Scout Cars and Saracen APC’s. The Regiment was reduced to a squadron on 31st July 1976 and continued to train in the 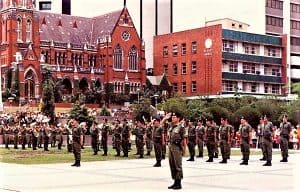 Freedom of the City of Brisbane 1974