The Roma Troop was formed in September 2000, and in 2002 a section of troopers demonstrated the skills and tradition of the Lighthorse during the Harry Redford trial re-enactment festivities in Roma.

As part of the 2003 “Roma Remembers” celebrations; commemorating 85 years since the planting of Roma’s heritage listed ,bottle tree, avenue of Hero’s, which honours the men from Roma district who lost their lives in World War 1 ; the Roma Troop hosted the inaugural “Association Cup”. The Association Cup is in keeping with the “Prince of Wales Cup” which was presented to the Australian Lighthorse in 1904. Competitions were traditionally held between troops from 1906 to 1953 and this tradition lives on with the “Association Cup”

In 2004 the Roma troop were invited to lead the Cobb and Co Celebrations Parade in Surat. This was to commemorate the last Cobb and Co Stage coach run in Australia, which ran from Yuleba to Surat.

In 2005 the Roma troop were again invited to lead the street parade at Wandoan during their special celebrations that year.

2006 found the Roma Troop again invited to lead a parade for the Toast Masters District 69 Annual Conference held in Roma that year.

Training begins soon after Australia Day, in February, each year. With rides every 2 weeks in preparation for Roma’s “Easter In The Country” street parade and festivities.

The Roma troop attend Anzac Day parades and ceremonies in Roma and Charleville and enjoy great support from the RSL in both communities. 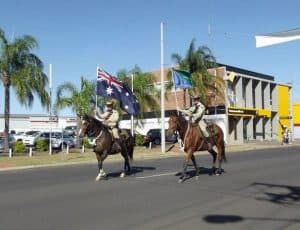