As the sun began to drop to the horizon on that Autumn day in 1917, General Harry Chauvel knew time was running out for his attack to succeed against the enemy entrenched in the southern Turkish garrison town of Beersheba.

The hill objective of his first stage of the attack, the taking of Tel el Saba, was running well behind schedule. Turkish artillery that was overlooking and protecting the valley approaches to the town was stationed on this high ground. This barren rock-strewn and rather innocuous hill, had to be taken before he could launch his attack on the township proper.

Hours had long since passed for the planned second stage to begin, but to commit his Australian 4th and 12th Light Horse at the town proper would be suicide with Tel el Saba still controlled by the enemy. Such an advance of men and horse would be cut to ribbons by Turkish artillery and machine guns before they even reached the trench works surrounding the town and its precious water.

Finally the signal he had been waiting for, his New Zealand force of Mounted Riflemen had taken the hill and captured the guns. Too late now to unleash his Light Horse regiments in the traditional combination mounted advance and dismounted Infantry assault at the enemy as the sun would set within the hour. Too far to retreat back thirty miles into the desert to water his men and horses at Kalasa. “Harry’s” next decision was radical and high risk – he ordered his mounted troops to storm the town in a full cavalry charge. With just bayonets drawn, the Australian Light Horse famously made its heroic charge, and entered into the history books with an incredible victory based on courage and tenacity.

What most troopers of the Light Horse could not see as they waited so long in anticipation to join the fray, was the actions of their fellow troopers in the New Zealand Mounted Rifles, as they made the arduous attempt to take the high ground of Tel el Saba. It is another Anzac tale, but this time a New Zealand one. 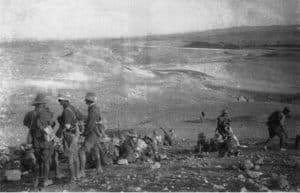 Looking down from Tel el Saba

The attack on Beersheba was more than an attack on an isolated garrison. Beersheba was the pivotal point of a new strategy to break out of the stalemate of the Turko-German stranglehold on the fortified township of Gaza and the Tel el Sheria line. Two previous unsuccessful attacks on Gaza had allowed the enemy much time to greatly improve entrenchments and battlements of the town. It was reasoned that an attack on Beersheba at the other end of the Tel el Sheria line would draw men and equipment away from Gaza and weaken the town in preparation for a third attack.

The advance on Beersheba had to be a surprise and the Desert Column of the Anzacs swung deep into the desert. The plan was to water at Kalasa, then march all night to break out of the desert and attack the outpost in the early morning light.

New Zealander, Lieutenant Colonel James McCarroll of the 11th Auckland Regiment, NZMR reflected the mood of the men as they began the night march for the big attack:-

“We moved off in three columns. Wheeled units on the road, New Zealand and Australian [Division] on the right and Aussie Division on the left. Never before had such a force moved off. We were now south of Beersheba – we are to have a business interlude with the Turk tomorrow.

We carried two days rations for men and horses on the wagons. So with water available for horses we could last four days. Never before had the moon looked down on such a force in size and brightness, everyone was in great spirits. We would have sung if we were allowed.

At every halt we lay down with our horses and slept. We had to cross some very soft ground, result of previous rain, considerable area of cultivated land. We were to halt at 2400 for two hours, so we had something to eat and a sleep. I went along the Regiment, the whole force was asleep except a horse blowing something out of his nose – not another sound.”

The next night James McCarroll enters into his diary the events of the attack:

“The advance guard ran into a Turkish patrol but they got away, on we went and as we reached the high country the sun broke through we saw Beersheba on our left about five miles away. The Commanding Officers joined the Brigadier and from a hill looking out we could see the position.

The Turkish Cavalry were on the move, evidently they were in a hurry to make defense against us.

Established the fact of water in the wadi, the second was the hill, a very prominent round hill close to the wadi. 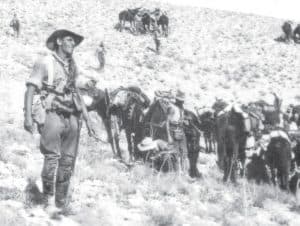 Tel el Saba the aftermath. From the freezing cold of the night to the burning heat of the day.

The Brigadier was pushing us on, so I went forward to investigate, to go up out of the wadi was difficult open ground and the banks were about twenty feet high. It looked to me, by keeping close to the North bank the men could get up in single file, then the bend in the wadi gave us some cover. I sent for the other Squadrons while the 11th advanced.
It took some time to get up the hill in single file, machine guns were working hard and soon the 11th were climbing out of the wadi and up the hill.
Some of the Light Horse came along and I arranged with Colonel Bill to go over to the left, as we took the hill we dismounted in the wadi and took the hill on foot.
I got the artillery to open fire and directed their fire onto the Turkish machine guns – this ensured our men [were able to] get up the hill. The artillery were doing a great work, we were in good line near one giving covering fire.
I signaled the Artillery to lift up 200 yards and we advanced very quickly, the ground was very rough, large boulders covered the ground, we were now near the second position, Turks were shelling hard, this hill was the key position – then the final rush we took the hill. My signalers got in touch with Brigade and reported that we had gained the hill – the Turks lashed at us with shells and it was quite impossible to stay on top.
I got to a position where I could see ahead and a great sight suddenly sprung up – on our left lines and lines of horsemen moving. The Turks were on the run and the Aus Division was after them – we could see the horses jumping the trenches – dust everywhere. The fire slackened and it seemed that Beersheba was ours. 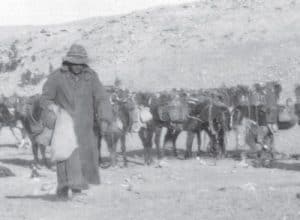 Tel el Saba the aftermath. This shot obviously taken early in the morning, in the background a trooper prying out stones from his horses hooves.

We came in for a very heavy shelling. The country on our front was too rough for horses, there was no doubt Tel el Saba was the key to the position, when the Turk lost that he had to retire. If the Turk had had another week he would have made this position much stronger. Evidently they did not expect such a force to attack him in the rear. Our men were very tired, good news from Gaza all positions have been taken.
We held this hill tonight. We were allowed to rest, so we did. The horses were in a good position – there was a large force gathered round this hill.
During our advance while spotting for the artillery I directed them onto good targets, a nest of machine guns – I said “That’s the stuff to give them” – Hatrick sent [this message] by signal, the Artillery knew what it meant and they pumped in all guns. The Artillery commander came along tonight and was telling me that he was a very pleased man, they did great work – so did our men. General Chaytor and Meldrum were in great heart too.”
There was to be another year of war for the Anzac horsemen of World War One, but no day shall be remembered with more pride than the day Harry took his gamble and won. We Australians and New Zealanders are forever in their debt.

(Thanks to Steve Butler of New Zealand for this account of the taking of Tel el Saba by the NZMR, this critical attack by the New Zealanders is often overlooked in the telling of the Beersheba victory)