The War Trophy that stood for more than thirty years overlooking Sandgate Pier and Bramble Bay was a 75mm German “Whiz Bang” field gun captured from a combined German and Turkish force during the last Light Horse charge by the Australian Forces during the 1914-1918 War. (German artillerymen and machine gunners assisted the Turkish force.) All light horse regiments were in fact mounted infantrymen, for they made their battle charges with drawn bayonets. After the successful charge and victory during the battle of Beersheba, in 1918, the commander in chief of the campaign, Lord Allenby, decided in August that year to convert the 4th Australian Light Horse Brigade into a cavalry brigade which would charge with drawn swords.

At pre dawn on September 22, 1918 the 11th Australian Light Horse Regiment of Cavalry charged across two miles of open country to capture the important Syrian rail link town of Semakh on the shore of the sea of Galilee. This charge was made after a hurried ride of some ten miles, and the 75mm field gun was a trophy of that battle.

The Sandgate War Committee was renamed Soldiers’ Reception and General Committee at a meeting on November 1, 1918. It was an entertainment committee formed to raise funds for a War Memorial, and at that meeting an application was made to the Sandgate Town Council for permission to erect a memorial in the town’s central park. At a subsequent meeting held in the Mayor’s room on February 6, 1920 the Sandgate War Memorial Committee came into being. A meeting of that committee held on December 14 that year empowered Mr E.J. Shaw, a resident of Bracken Ridge and president of the Royal National Agricultural & Industrial Association, to act on their behalf whilst in Melbourne on business and apply to the authority concerned for a War Memorial for Sandgate. The Sandgate Town Council sanctioned this and Mr Shaw was authorised to act on the War Memorial Committee’s behalf.

Coincidence becomes paramount at the next stage of the endeavour to secure a war trophy. Upon the cessation of hostilities, Mr Laurient (Laurie) U.C. Kempster rejoined the Sandgate Town Council as Assistant Town Clerk. He had started with the council as a Junior Clerk in July, 1914.

Laurie had been a Sergeant with the 11th Light Horse Regiment when the German “Whiz Bang” field gun was captured and was awarded the Meritorious Service Medal in recognition of his conspicuous and valuable service during the Syrian Campaign. His younger brother Felix, also an 11th Light Horseman and a resident of Sandgate before the War, was awarded the Military Medal.

Laurie was a very active member of the 11th Light Horse Association, during his lifetime holding executive positions for many years. 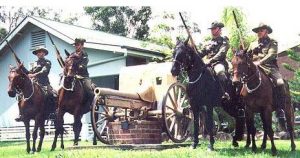 Laurie Kempster was present when the gun was unveiled by the then governor of Queensland, His Excellency Sir Matthew Nathan, as it stood on its base at Shorncliffe (Sandgate as it was known in those days) on Saturday August 4, 1923, and was surprised to learn that it was the gun the Regiment had captured in Syria. By this time he had become Town Clerk of Sandgate, the position he occupied when the Sandgate Town Council became incorporated within the greater Brisbane Authority (Council) in 1925. He moved to the Brisbane City Council that year and managed a number of departments before becoming Deputy Town Clerk of Brisbane in 1952.

Due to the loss of records the actual dates can only be conjecture, but after having withstood the sea air at Shorncliff for more than thirty years, the old field gun finally succumbed to the elements to the extent that the wooden wheels deteriorated so badly the gun had become an accident hazard. Around 1953 the Brisbane City Council removed the gun from Shorncliffe and the Parks Department placed it on a base in New Farm Park. It was minus wheels and was painted in bright colours as a plaything for children. In 1983 negotiations with Army establishments were entered into, after being stored at Wacol for a time, custodianship was granted to the 2/14th Light Horse Regiment (Queensland Mounted Infantry) in 1984. The gun is now located near the 2/14 Light Horse Regiment (QMI) Lines at Enoggera Brisbane.