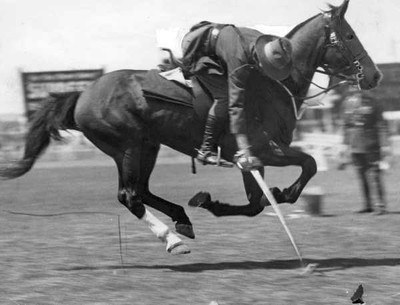 The Association Cup was first suggested as an inter troop competition within the Australian Light Horse Association by Jerry Murphy and other interested members in the mid 1990’s. The events were designed with input from Light Horsemen from the militia period, and designed to keep alive the skills and horsemanship of the original Light Horse.
It was proposed that the competition be conducted along similar lines to the Prince of Wales Cup, which was a competition for troops of about 30 mounted troopers.
The first running of the Association Cup was held in Roma, Queensland as part of the ‘Roma Remembers’ celebration on 20th – 21st September 2003. It is hoped that the event is run close to Beersheba Day each year so as to increase the profile of the Australian Light Horse Association.
However, it may be advantageous to run the event in conjunction with a local event if that will increase public awareness in that area.

The Cup has now successfully been staged in QLD, NSW and WA.