…In spite of the main body being deflected by another
order, this officer pursued what was described as a ‘very vigorous course’ 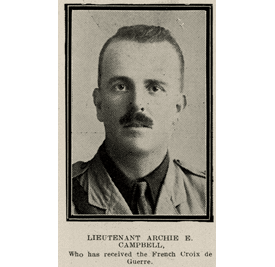 through the gardens, clearing out 150 enemy and many machine guns before reaching the railway line…

Archie Campbell was born at “Cubbo Station”, Wee Waa, New South Wales on the 17th October, 1885. On enlistment as a trooper in the 2nd Light Horse Regiment (Qld) on the 19th August, 1914, he was employed as a business manager of Bridge & Co Ltd, Toowoomba.
Promoted to Squadron Quartermaster Sergeant on 1st December, 1915 and commissioned 2nd Lieutenant on the 11th February, 1916 and Lieutenant on the 15th June, 1916, promoted Captain on 20th April, 1917 and Major on the 1st July, 1918.
In June of 1916, he transferred to the Camel Corps, joining the 3rd (Anzac Camel Bn in November, 1916, then the 1st (Anzac) Camel Bn in April, 1917. He was acting adjutant of the 1st Camel Brigade Headquarters from the 1st February, 1918 until he joined the 14th Light Horse Regiment on the 1st July, 1918.
Major Campbell was one of the most decorated Light Horsemen of the 1st AIF. He was awarded the Military Cross (MC) for gallantry in Sinai and Palestine on the 19th April, 1917 and the Distinguished Services Order (DSO) on the 30th September, 1918 at Salahiye (Damascus).
Citation/London Gazette,4 October,1919, for DSO
Maj. Archie Eric Gordon Campbell, M.C., 14th A.L.H.R. (Egypt).
For distinguished leadership and devotion to duty. On the 30th September, 1918, at Salahiye (Damascus), he was charged with the work of clearing the gardens to the south of the village, in expectation of the whole force following. In spite of the main body being deflected by another order, this officer pursued a very vigorous course through the gardens, clearing out 150 enemy and many machine guns before reaching the railway line. He also did very valuable work in consolidating the position taken up across the road. Throughout the operation his work was excellent.
On returning to civilian life after the war from 1914-18, Major Campbell became the A.M.P. representative at Toowoomba and later Dalby (Qld), retiring in 1950 to live at Tamborine Mountain till he passed away in 1963.
Major Campbell is the father of our patron, Sir Walter Campbell AC. QC, to whom I am truly grateful for this splendid information.