As a by-product of some research in which we were recently engaged, we became interested in the origin of the hat, felt, khaki. It occurred to us that it might be well to dig a little deeper and set the record straight before this item of dress, like the red tunic of old, is forced out of use by the exigencies of modern war…

Although a felt hat was authorized for wear by British troops stationed in certain parts of India, it does not appear to have been worn by British regiments which served Australia in the early days of the colonies. From the available evidence, it seems to have been first worn in this country by the Victorian Mounted Rifles, a volunteer unit formed in 1885, at the insistence of the commanding officer, Colonel Tom Price. The Tom Price hat was looped up on the right side because, as the Colonel said, this enabled the troops to look the inspecting officer straight in the eye when marching past. 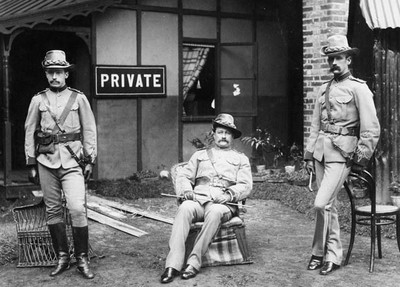 On 22 December, 1890, the military commandants of the Australian colonies assembled in Melbourne to discuss subjects of common interest, among them being the substitution of a khaki uniform for the red tunic. It was agreed that the whole of the Australian forces, with the exception of Artillery, should wear a looped-up felt hat with the left side looped up and secured with a hook bearing the following devices: General Officers and Permanent Staff, the Badge of the Colony; Cavalry, the Crest of His Excellency Lord Carrington; Engineers, a Grenade; Mounted Infantry, the Badge of the Colony; Infantry, Medical Corps and Reserves, a General Service Button. Cavalry and Mounted Infantry were authorized to wear, in addition, black cock’s plumes.
All the other Colonies adopted the felt hat. Victoria and Tasmania looped up the right side while the others favoured the left. Queensland and Western Australia used a regimental badge on the upturned rim, while Victoria and Tasmania adopted a brass lion’s head with a hook protruding from the mouth. South Australia used a kangaroo,s head instead of a lion’s.
Most of the contingents sent by the Colonies to the South African War adhered to their own mode of wearing the hat. However, when the 1st Australian Commonwealth Horse was dispatched in 1901 after Federation, the hat became universally looped on the left side.
In 1903, the hat was authorized for general use throughout the Australian Military Forces when a Commonwealth pattern was adopted. The headdress was now adorned with various embellishments. Light Horse Regiments in New South Wales wore black cocks plumes, while the Victorian Light Horse favoured a single eagles feather. Light Horse Regiments in Queensland, South Australia and Tasmania wore a plume of emu feathers. Western Australian Light Horse started with the feathers of the black swan but later a plume of ostrich feathers was authorized. Field Artillery wore a plume of similar pattern to that of their Light Horse Regiments and, in addition, had a red and blue rosette and the Artillery Grenade. All other units were identified by a rosette and a regimental badge on the looped-up rim, the distinguishing colours being: Garrison Artillery, blue and red; Engineers, red; Infantry, black; Army Service Corps, white; Medical Corps, chocolate; Veterinary Corps, blue.
A further change was made in 1906, when khaki puggarees of seven folds with distinctive colour insertion were adopted.
However, soldiers, like women, refuse to let their headgear get into a rut and, by 1912, fashion had brought about marked changes. The puggaree was now replaced by a cloth band two inches wide of the following colours: Light Horse, white; Artillery, scarlet; Engineers, dark blue; Infantry, green; Army Service Corps, white with a blue centre stripe; Medical Corps, chocolate; Veterinary Corps, maroon; Ordnance Corps, blue with a red centre stripe; Army Legal Department, French grey. A brass unit numeral was worn in the front of the hat above the band.
When the 1st AIF was raised for overseas service in 1914, all arms and services wore a plain khaki band with the Australian Military Forces badge on the looped-up rim. Queensland Light Horse Regiments, however, wore their emu plumes, to the envy of all the other regiments, who had neglected to produce a similar idea and insist of sticking to it.

The Queenslanders enjoyed their distinctive privilege until March 1915, when the whole 3rd Light Horse Brigade, containing not a single Queensland unit, arrived in Egypt wearing emu plumes. The Queensland units protested vigorously and the GOC of the AIF, General Birdwood, called a conference of Light Horse brigadiers to settle the matter. The conference failed to reach anything remotely resembling agreement, so the General referred the matter to the Australian Government. After some hesitation, the Minister for Defence, Sir George Pearce, ruled that all Light Horse Regiments might wear the emu plumes – provided that no expense accrued to the Government. There being no emus in Egypt, the price of plumes, even the veriest wisp of a plume, went up enormously.
After the war, the khaki band was retained until 1930, when puggarees with a distinctive color insertion returned to favour. In the Second World War, we kept the puggaree but abandoned the coloured stripe.

Today, Army members wear the slouch hat with the brim down to provide additional protection from the sun when not performing ceremonial duties.