It is hard to comprehend of the thousands of Light Horsemen and supporting mounted units who left these shores between 1915 and 1918, that only one man could be awarded the Commonwealth supreme award for Gallantry – the Victoria Cross – and that, while serving as an infantryman during the Gallipoli campaign.
Second Lt. H.V.H. Throssell was born at Northam, West Australia on 27th October, 1884, from a pioneering West Australian family. Throssell was educated at Prince Alfred College in Adelaide and then returned to farming at Cowcowing, West Australia.
He enlisted in the A.I.F. on the 29th September, 1914 and was posted to the 10th Light Horse Regiment. He had previously served six years in the ranks with the 18th and 10th Regiments Citizen Forces.
Throssell did not embark with his unit, the 10th, but joined it on Gallipoli two days before the fierce fighting at Walkers Ridge early on 7th August. 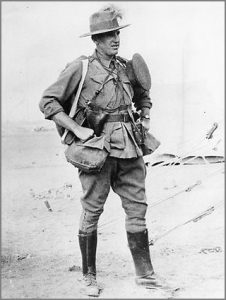 On that day the 3rd Light Horse Brigade faced the heaviest fire encountered by the A.I.F. when four lines of the 8th and 10th Light Horse regiments charged the Turkish positions at “the Neck”. Throssell went over the top with the 4th wave, which had seen three other waves cut to pieces.
Throssell managed to get through the day unscathed.
Throssell was awarded the V.C. for his bravery and devotion to duty in the battle for “Hill 60”. Despite his terrible wounds he refused to leave his post to obtain medical assistance until all danger had passed.

In April 1916 he was invalided to Australia and allotted “light duties”.
By April 1917 he was back with his unit for the second battle of Gaza; on 19th April his brother Frank was killed in action and Hugo was again wounded. He rejoined the 10th after recovery in December and served with it in the operations which culminated in the capture of Jerusalem. He had been promoted to Captain on 15th August, 1917.

His A.I.F. appointment was terminated on 13th February 1919. Later that year he married the novelist Katherine Susannah Pritchard – they had one son.
A radical Socialist, he suffered badly after the war and finally committed suicide at his Lazy Hit Ranch, Greenmount on 19th November, 1933 and is buried at the Karrakatta cemetery in Perth.

Throssell’s Victoria Cross and other service medals were donated to the people for Nuclear Disarmament in 1984. The Returned Services League purchased the Medals and donated them to the Australian War Memorial, where they are now displayed in the Hall of Valor.