Bob was born in 1919 to an old pioneering family in the small conservative farming community of Coopers Plains, now an outer suburb of Brisbane. His father was a wonderful horseman who exhibited at local shows mainly in harness events, a trait which Bob inherited.

On leaving school during the depression he worked in the rural industry mainly on small crops farms around Sunnybank.

But Bobs heart was in the West and at an early age he left his close knit family to work on a cattle and sheep station ”Colaine” 30 mile west of Winton on the Boulia Rd. Hard work from sunup to sundown soon cured his homesickness. His boss was Rex Phillott a legend amongst western cattlemen. One day in the late 30’s while Bob and Rex Phillott were outside the North Gregory hotel in Winton a small elderly man with gray hair and a goatee beard walked past in the opposite direction Rex said good day, the stranger acknowledged and walked on by, Bob asked the question, who was that? Rex said that’s Sir Sidney Kidman. Kidman was Australia’s legendary cattle king he died shortly after. His story is told in the book ”The Cattle King” by ex 5th Light Light Horseman Ion Idress

Stockwhips, gooseneck spurs, concertina leggings and moleskin britches were the attire of his trade and Bob learnt the trade well with intentions of eventually buying his own property, after several years war clouds were gathering and along with several other local men he joined the Militia qualifying as a farrier . 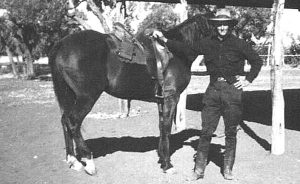 He joined the 11th Light horse Regiment in 1938 and attended the Beaudesert camp in 1940.He heard that the Army was looking for Farriers to transfer to the Re Mount troop stationed at Selheim outside Townsville. He then transferred to the 2nd Light Horse and went on maneuvers ending up at Rolleston north of Townsville in 1941. Bob by this stage realized that there was no future in the Light Horse and whilst in Brisbane that year he joined the 15th Infantry Battalion 2nd AIF. Ironically after joining the 15th battalion he found himself posted to Blue Water about 10 Miles West of Townsville as a Farrier. The Battalion was still using Animal Transport.

In 1942 all the horses were removed from the Battalion and all members were issued with new Khaki Uniforms and large quantities of green dye. The uniforms were dyed green in preparation for jungle operations. The Battalion boarded the Troopship ” Duntroon” at Townsville in January for the journey north to New Guinea. Bob still remember the wharfies chanting as they marched on to the wharf  “5 bob a day murderers”. To this day he can never understand the reason why.
The Battalion disembarked at Milne bay and units were ferried to Buna where there was heavy fighting. Bob was part of a group that landed at Cape Endenpara at 2am in the morning meeting with heavy resistance and suffering heavy casualties. He remembers the Tokyo Rose radio Broadcasts on a daily basis ” give up Aussie, you are surrounded, lay down your arms”…

While home on leave in 1944 he married Evelyn Tuckett a local girl, also of pioneering stock who served throughout the War in the Volunteer Defence Corps .

Bob returned to Bouganville with the 15th Battalion and took part in some of the last battles of the war. He remembers the last operation, which involved crossing the nebo fjord on the 15th August 1945. It was a large operation however unseasonal bad weather caused flooding and the crossing had to be postponed until the 17th August 1945. WW2 ended on the 15th August 1945 and fate had stepped in and saved many lives.
Upon discharge Bob headed back to the western country he loved. However recurring bouts of Malaria forced him to return home where the problem could be treated.

Horses were never far away. Besides working for Robert Jackson and Sons,
a well known firm of carriers in Brisbane he also showed horses in harness turnouts . Very rarely, if ever, not being amongst the prizewinners, something he is still doing in the LHA.

When Jackson’s disposed of their horses Bob was offered a job driving one of these new fangled inventions called a ”truck”. no way! Bob and Evelyn sold up took their family of three children and bought a dairy farm ”Verwood” at Coomera near the Gold Coast.

Once again Malaria stalked him. They sold ”Verwood” and moved to a small farm near Sunnybank.

Still breeding good horses and also fine Jersey Cows, Bob’s legendary skills of driving teams was highly sought. Several times in the 50’s he was asked to drive a team of five horses in one of Cobb and Co.’s original coaches .In 1954 he drove before a capacity crowd at the Brisbane Exhibition ground in front of Queen Elizabeth the II.

The army was never to far away either. The Department of Defence now employed him at ”Damour Barracks”, a job he was to hold for 27 years. In the meantime he joined the CMF into the Royal Australian Engineers serving with them until retirement.

Bob was now breeding Stockhorses, competing and very rarely out of the money, he had also been asked by a consortium to train and drive a team of 6 Clydesdales hooked to a heavy wagon once again travelling to country shows, as well as some movie work. In 1987 he joined the Light horse Association. this was right up his alley, horses and the Army, it could not be better. His partner of 54 years Everlyn supported his every move. Together they travelled far and wide to support the Light Horse Association. In 1990 Bob was awarded Life Membership of the Stockman’s Hall of Fame at a gathering of old drovers, Stockman at the headquarters in Longreach. He was also awarded Life Membership of the Light Horse Association along with Bob Smith and Jack Scott in 1996. 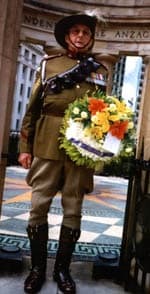 Material things never meant much to Bob, like his father before him, his family, his love of Queen and Country, his code of conduct were all he needed for satisfaction in life.