Their badge was the crossed rifles with a wreath of Waratahs and a Queens crown with a lion rampant.

In September 1914, the 6th Light Horse Regiment Australian Imperial Force was raised at Holsworthy Military Camp under the command of Lt Col C. F Cox CB, CMG, DSO, VD also a Boer War veteran who had distinguished himself while in command of a squadron of New South Wales Lancers during the conflict in the South Africa. On the 19th of December 1914, the Regiment sailed aboard the transport “SUEVIC”, bound for Egypt and the Suez Canal.

After training, they landed at Gallipoli on the 20th of May 1915. The regiments distinguished service on Gallipoli and in the Middle East is well recorded. Shrapnel Gully, Johnsons, Jolly, Romani, Amnan, Es  Salt, Beersheba, Gaza, Meggido, the Jordan Valley. 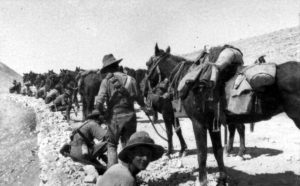 MEN OF THE 6TH LIGHT HORSE REGIMENT DURING A TEN-MINUTE SPELL ON THE OLD ROMAN ROAD BETWEEN TALAT ED DUMM AND JERICHO. AWM photo

At Romani it was the first time that they had served together as a complete mounted Regiment and, along with other Light Horse units, took over 11,000 prisoners. On the 28th of June 1919, a total of 15 officers and 391 other ranks sailed for home after having been detained since the previous December due to their policing duties during the Egyptian Rebellion, finally arriving in Sydney on the 3rd of August 1919. The command at this time fell to Major D.G. Cross, Lt Colonel C.D. Fuller DSO – Order of the Nile, having taken temporary command of the 2nd Light Horse Brigade. During the Regiments almost five years on active service, it received 5 DSOs, 5 MCs, 6 DCMs, 13 MMs and was awarded 5 foreign decorations. The Regiment suffered 134 deaths either killed in action or died of wounds, etc. had 461 wounded in action, 1265 were evacuated through illness and had 16 taken prisoner of war.

In 1928, during a review of the 4th Cavalry Brigade at Liverpool on Sydney’s outskirts, the Guidon with battle honours emblazoned was presented to the 6th Light Horse Regiment New South Wales Mounted Rifles by Lt General Sir Harry Chauvel GCMG, KCB. Croix de Guerre (France) the Guidon party once again consisted of some distinguished soldiers, Major C. M. Featherstonhaugh** DSO, a Boer War veteran, Lt R. Blake, who carried the Guidon and Major F. B. Hinton DSO. In 1930 the 6th Light Horse was reformed once again to include parts of the central west with the headquarters at Orange during this period as CMF or Militia, as it was known. The Regiment once again maintained a distinguished record until it was demobilised and became the 6th Motorised Regiment and part of the 1st Armoured Division in December of 1941.

In 1934 the Parkes troop of the 6th Light Horse had won the Prince of Wales Cup, they also fielded a reasonable polo team, members of the troop also competed in the King’s Shoot, at that time Australia’s premier military shooting competition.

Several members rose to prominent positions before, during and after the war. From the ranks of the Regiment came Sir Colin Hines, former State President of the NSW Returned Services League, Sir Marcus Loane, former Anglican Primate of Australia, Colonel Eric Hennessy was a sergeant in the Orange troop between the wars, was a member of the Australian Contingent for the Coronation of King George the 6th in 1937 and did guard duty at Buckingham Palace, a unique honour. He later became CO of the 2/6th Independent Company during the Second World War. A former administrator of the Northern Territory, John England also served in the Regiment.

Bruce L’Estrange of Condobolin, who won the Military Medal while serving with the 2/7th Independent Co in New Guinea as a sergeant, joined the Regt as a 17 year old. 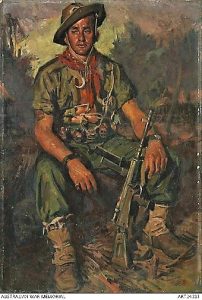 Bruce also served with the Occupation Forces in Japan and had the distinction of leading the Victory Contingent in London after the war, a painting of Bruce simply entitled Slugger now hangs in the Australian War Memorial, Canberra.

During the annual camp at Orange Showgrounds in 1939, Mr Charles Chauvel enlisted the services of the Regiment to take an active part in the making of the film 40,000 Horsemen, starring Chips Rafferty. Other scenes were filmed among the sandhills at Cronulla and at Southport, Queensland. Lt Col Nat Barton commanded the Regiment up until the outbreak of the Second World War, when members of the Regiment disbursed to other AMF and AIF units on the world’s battlefronts. In 1948, the CMF was reformed. The unit became the 2/6th Armoured Regt, part of the 1st Armoured Brigade under the command of Lt Col W. A. Ormiston, with the HQ at Orange. In 1953 the command fell to Lt Col Costello and then, in 1956, due to reorganisation, its long role as a mounted unit was terminated. It was reorganised as an Infantry Battalion and became part of the 8th Infantry Brigade under Lt Col J. G. Wylie E.D. On the 1st July 1959, Lt Col C. B. Cutler became CO, in 1960, its role as an Infantry Btn was terminated and was downgraded to a mounted rifle company of the Royal New South Wales Regiment with its Headquarters at Orange and platoons at Bathurst, Dubbo and Parkes.